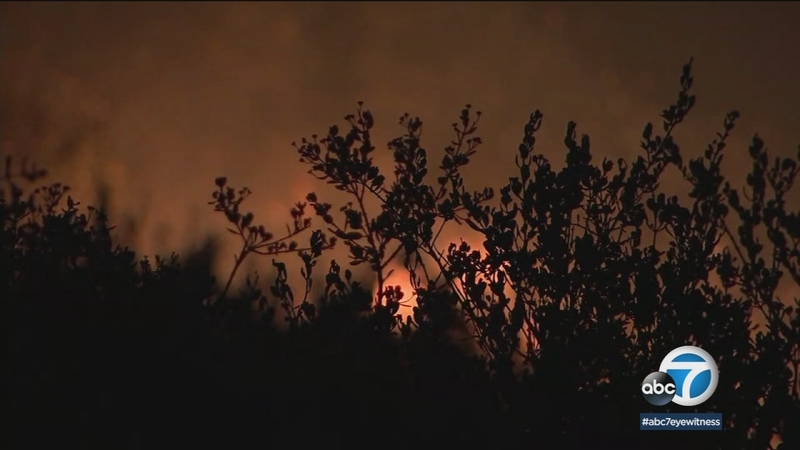 VENTURA, Calif. (KABC) -- The raging Thomas Fire is estimated to have charred 143,000 acres in Ventura County, as some evacuation orders were lifted in parts of Santa Paula and Ventura Friday night.

The massive wildfire remained at 10 percent containment, fire officials said, after erupting Monday evening near Thomas Aquinas College. The blaze has become the 16th largest wildfire in the state, according to statistics from Cal Fire.

The blaze has subsequently destroyed at least 467 structures, including 158 homes in Ventura alone. Eighty-one other structures have been damaged.

The fire is expected to spread toward Santa Barbara County, Sespe Wilderness and the Sespe Condor Sanctuary. They stress a red flag warning is still in the area, but lower winds are a good sign.

Residents were able to return back to their homes in Santa Paula after being evacuated for days because of the destructive Thomas Fire.

More than 4,000 firefighters have been assigned to the incident, along with 24 helicopters, several fixed-wing air tankers and a 747 supertanker. A total of 712,000 gallons of water have been dropped on the stubborn flames, officials said at an afternoon press conference.

While winds were relatively calm Friday morning in the Fillmore area, terrain-driven flames flared up before dawn and a red-flag warning remained in effect.

Officials said the fire is inching its way north and west, toward the Santa Barbara County line, all while crews work to protect homes in Ventura, Ojai, Santa Paula, Carpenteria, and parts of Ventura County.

At one point, 88,000 people were evacuated -- the equivalent of relocating the entire city of Santa Barbara. As some people are allowed back into their homes, they face a different struggle -- dealing with the nagging blanket of smoke.

The stubborn flames are showing no sign of losing steam, despite a lull in the high winds. Officials said exposure to smoke and dust can cause eye, nose and throat irritation; coughing, nausea, headaches and even nose bleeds.

"I have asthma, so it's kind of hard to breathe. I'm trying to stay inside as much as I can, but I have to go to work," resident Camille Kastner said.

At a community center that was serving as an evacuation shelter in Santa Paula, Red Cross volunteer Randy Hitchcock arrived all the way from Sioux City, Iowa, to help displaced residents.

"It's just a phenomenal outpouring from the community and what they're doing," Hitchcock said. "It's great to be here to help them out. That's what our mission is."

Authorities said at least one person was killed in a car crash connected to the fire in the Steckel Park area. A source told Eyewitness News the person appeared to be fleeing from the blaze.