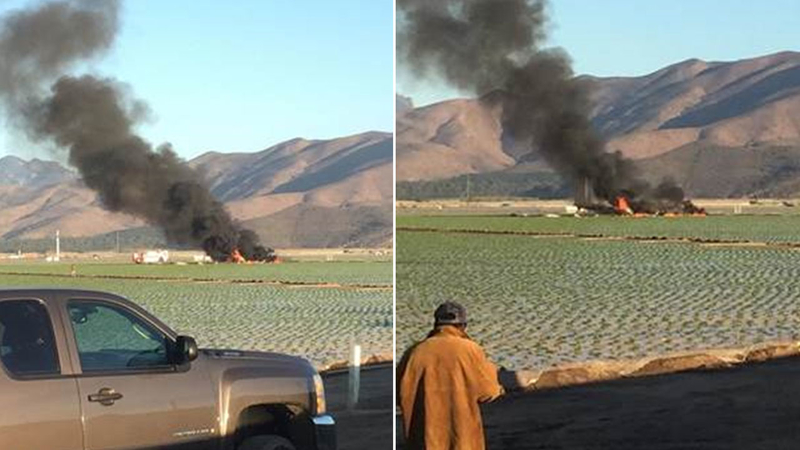 The plane crashed and disintegrated at around 5:15 p.m. The victim was reportedly ejected from the single-seat aircraft. A parachute was found nearby.

Smoke was seen smoldering from the aircraft. Several nearby residents heard an explosion and witnessed the aftermath.

Steve Thomson lives a block from the strawberry field.

"We heard them coming in and then one of them sounded just a little strange. He was coming in fast, and then I said someone went down and I ran outside and saw the plume of smoke," he said.

The pilot of a Hawker Hunter military aircraft died after crashing near a base in Port Hueneme Wednesday, Oct. 29, 2014.

Nobody on the ground was hurt. The pilot's identity has not been released pending notification of kin, but officials say he worked for Airborne Tactical Advantage Company, a civilian company that provides airborne tactical training to the U.S. military.

The retired seasoned fighter pilot had just finished playing the role of an enemy aircraft in an off-shore training exercise and was preparing to land, ATAC spokesman Matt Bannon said. The plane is a MK-58 Hawker Hunter, a British jet which was first developed in the 1950s.

This isn't the first time ATAC has lost a plane and a pilot in the area. Back in May 2012, Thomas "T.C." Bennet, flying another MK-58 Hawker Hunter crashed on approach to Point Mugu.

There was no indication of what may have caused the latest crash. The National Transportation Safety Board and Federal Aviation Administration have joined the investigation, officials said.