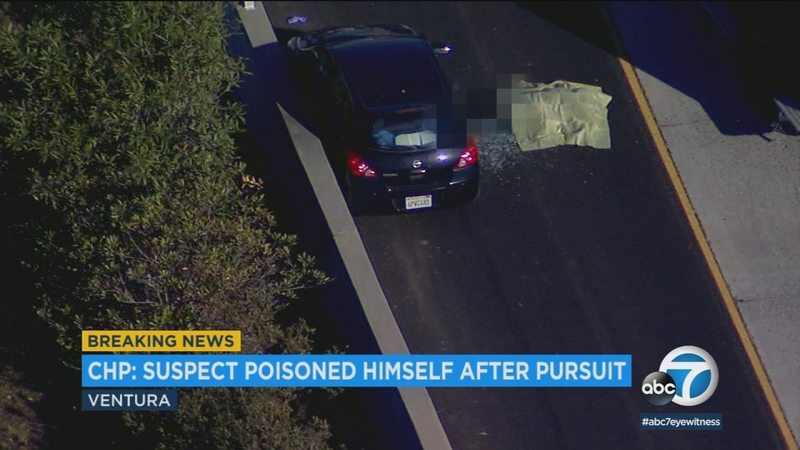 VENTURA, Calif. (KABC) -- A suspect who led police on a chase that ended on the 101 Freeway in Ventura has died after he apparently poisoned himself, the California Highway Patrol said.

The incident began when a check of a vehicle in Oxnard came back with information that the car belonged to a rape suspect, believed to be a 35-year-old man from Camarillo, CHP officials said. Officers tried to pull the vehicle over, but the driver refused, initiating a chase.

At some point during the pursuit, officers believe the suspect began to drink some sort of liquid poison. Officers said the man began driving erratically before slumping over into the passenger side of the car and eventually coming to a stop in the middle of the northbound 101 Freeway just south of Seaward Avenue in Ventura.

"We got calls that he was going to commit suicide," said Inv. Christopher Terry of CHP. "As he got toward Seaward, our primary pursuit officer saw indications of that by the gentleman drinking something and then flopping over to the right side of his car."

Terry said the car slowed down and then veered to the left before grinding to a halt against the center divider wall.

The substance that the suspect ingested was tested by the Ventura Fire Department's Hazmat team and determined to be a mixture of sodium chloride and potassium cyanide, Terry said.

The suspect was seen motionless outside of the vehicle before the coroner removed the body from the scene. The passenger-side glass was shattered by officers who removed the suspect from the car.