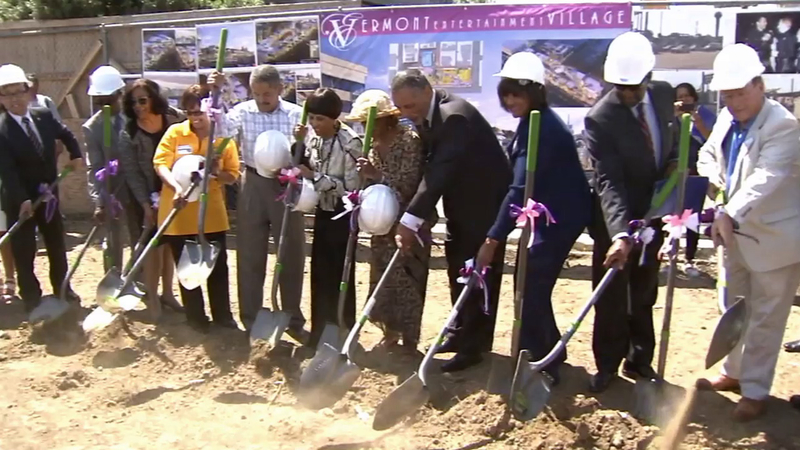 The Vermont Entertainment Village will take over a string of vacant lots at the intersection of Vermont and Manchester avenues.

Sassony Properties, City Councilman Bernard Parks and other city leaders broke ground on the project Wednesday morning. The site, which used to house an indoor swap meet, was destroyed by a fire during the riots. Wednesday marks the 23rd anniversary of the start of the unrest.

The retail and entertainment center will span across two blocks and take up about 190,000 square feet. The Vermont Entertainment Village will be an open-air promenade that will feature retail shops, multiple sit-down restaurants, a grocery store, a pharmacy and a movie theater.

"To be the pioneer or at least a catalyst to build something fancy in the inner-city, and I hope that other people would come to invest in this community," said Eli Sassony, project developer.

It's a grand concept, but at this point there are no secured tenants. Sassony said his company has a number of commitment letters and wants to be picky with its choices.

In addition to shopping and entertainment, the Vermont Entertainment Village is also projected to bring $99 million to the city in annual sales tax revenue.

Parks was a deputy chief of the Los Angeles Police Department during the riots, which broke out after four police officers who were videotaped beating up Rodney King were acquitted of assault by a jury in Simi Valley. They were later convicted of federal charges.

Although the rioting took place citywide, South L.A. bore the brunt of the destruction with property damage and loss of life. City leaders say they struggled to attract businesses to the area long after the unrest ended.

"This whole area used to be a big business, a beautiful business, but since the riots happened, all the businesses just left," said Marshall Rhodes, a South Los Angeles resident.

The Vermont Entertainment Village is slated to open in winter of 2016.