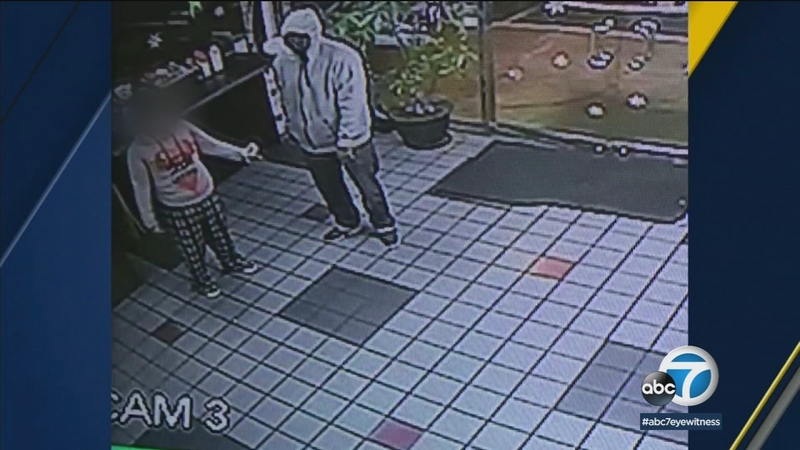 The shooting happened around 1 a.m. inside Modoo Donuts, which is located at 5411 Beach Blvd.

The victim's co-worker said the suspect demanded money from the register before firing his weapon.

The shooter was described as an African American man in a dark hooded sweatshirt with a bandanna covering his face.

A second suspect, described as either an African American or Hispanic man in a light-colored hooded sweatshirt with a bandanna across his face, was observed later by police on surveillance video waiting in the lobby area of the doughnut shop while the robbery was underway.

Both suspects fled on foot. It was not immediately known how much money the suspects made off with.

If anyone has any information about the crime, they are asked to contact the Buena Park Police Department at 714-562-3901.

ABC7 has decided to remove the comments section from stories. We believe very strongly that our audience should have an opportunity to discuss and debate events in our world; however, we have not been able to moderate the comments as well as we would like. Instead of hosting a platform that could allow a few loud and ugly voices to dominate a conversation, we want to encourage everyone to join us on our social media platforms and speak out there.
Facebook: facebook.com/abc7
Twitter: twitter.com/abc7
Report a correction or typo
Related topics:
buena parkorange countyshootingman shotarmed robbery
Copyright © 2021 KABC-TV. All Rights Reserved.
TOP STORIES
OC restaurant requires customers to prove they are not vaccinated
Some LA officials want vaccine mandate for city workers
Bay Area teen attacked by crocodile while vacationing in Mexico
CA to require vaccination or testing for state workers
Bee swarm in Diamond Bar kills 2 dogs, injures man
Billy Graham's grandson hospitalized with COVID-19
Former US Sen. Barbara Boxer assaulted, robbed in Oakland
Show More
SoCal temperatures to rise, humidity to drop amid sunny conditions
Koreas agree to restore communication channels, improve ties
Unvaccinated man in ICU still not convinced about vaccine safety
Kern County Sheriff's deputy among 5 killed during standoff
Most Dodgers players don't want Trevor Bauer to rejoin team: Report
More TOP STORIES News