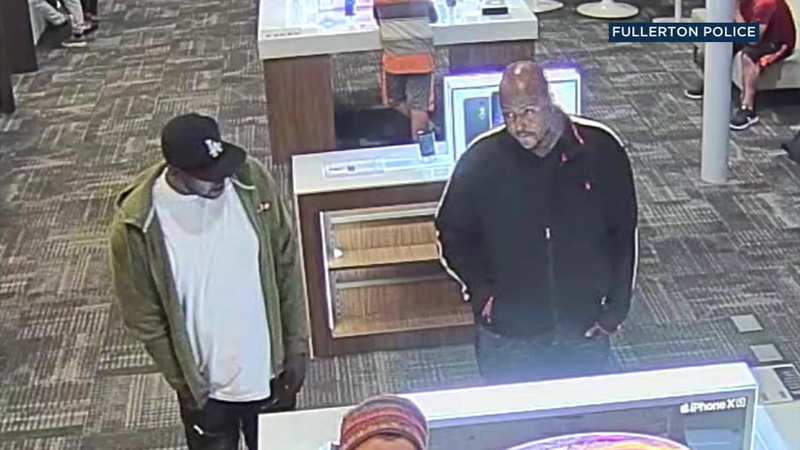 The video shows two men lingering around a display for the iPhone X. They look around, then quickly cut the cords connecting the phones to the display table, pocket the phones and walk out.

"These suspects entered the store, and they were gone within one minute of entering, with the stolen merchandise," said Sgt. Jon Radus of Fullerton police.

The suspects took the phones around 7:30 p.m. Monday at the busy store near the intersection of Harbor Boulevard and Orangethorpe Avenue.

Officers said they took four of the new phones -- and they didn't stop there.

Twenty minutes later, police said the suspects went to the other side of the shopping center and did the exact same thing at the T-Mobile store.

"In the 1300 block of South Harbor boulevard, they entered the store, they stole two of the same iPhone XSs and fled the location," Radus said.

Radus said authorities have seen an increase in robberies at wireless stores, especially when new phone models get released.

"I believe it's because the phones do carry quite a bit of value with them,".Radus said. "And it's an easy target. They can walk in and walkout within a minute."

Officers are reviewing the surveillance video of the suspects. Radus said no one was injured during the crimes, and the employees did exactly what they should have done.

"An iPhone XS may have value, but its value is not worth your life," Radus said. "We ask those in store, just be a good witness."