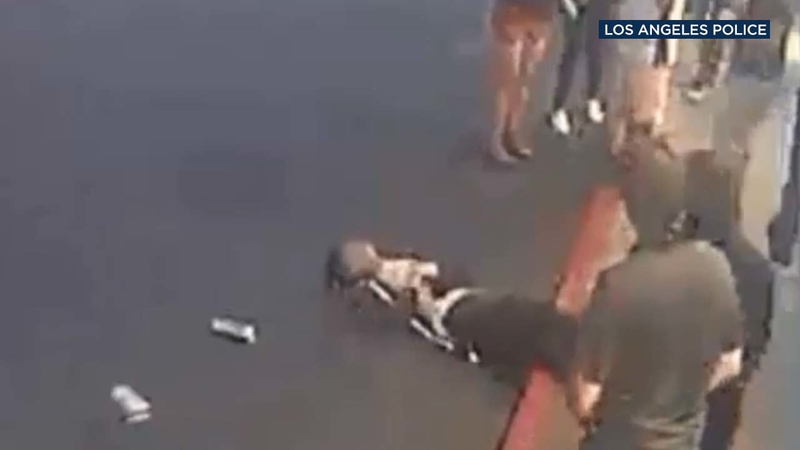 PALMS, LOS ANGELES (KABC) -- A man standing in front of a Palms restaurant was punched so hard he was knocked unconscious - and the brutal attack was completely unprovoked, Los Angeles police said.

The assault was captured on video, which shows the 28-year-old victim standing on the sidewalk outside a fast food restaurant in the 9200 block of Venice Boulevard on June 30. Out of nowhere, someone punches the victim, who then falls backward onto the street behind him.

Police said the man lost consciousness and suffered severe head injuries. He was taken to a local hospital for treatment.

The suspect fled the scene with a male and female companion in a white four-door sedan, LAPD said.

Investigators described the suspect as a Hispanic male between 18 and 21 years old, between 5 feet 8 inches and 5 feet 11 inches tall, weighing between 190 and 200 pounds with brown, curly hair. He was last seen wearing a white T-shirt, gray pants, white socks and red and white sandals.

The suspect's first companion was described as a Hispanic male between 17 and 20 years old, around 5 feet 6 inches tall, weighing between 140 and 150 pounds with dark hair. He was last seen wearing a black shirt with designs on the front, blue jeans with holes in the knees and black tennis shoes.

The suspect's second companion was described as a Hispanic female between 17 and 20 years old, with glasses and dark hair worn in a ponytail. She was last seen wearing a gray and black jacket, gray shirt, blue jeans and white shoes with a black stripe.

If you have any relevant information about this incident, you're urged to contact Detective Saucedo at (310) 482-6421. During non-business hours or on the weekends, call 1-877-LAPD-24-7 (877-527-3247). You can also submit anonymous tips buy calling L.A. Regional Crime Stoppers at 1-800-222-TIPS (800-222-8477).
Report a correction or typo
Related topics:
palmslos angelessearchassaultlapdattackman attacked
Copyright © 2021 KABC-TV. All Rights Reserved.
TOP STORIES
CDC reverses course on indoor masks in some parts of US
Ed Buck found guilty in West Hollywood meth overdose case
How do new CDC guidelines affect SoCal?
1 killed, 1 wounded in shooting at Corona movie theater
Arrest made in fatal shooting of Rite Aid clerk in Glassell Park
CSU to require all students, staff to get COVID-19 vaccine
OC congresswoman introduces Kobe Bryant Day resolution
Show More
Walmart will cover 100% of college tuition for its workers
Bay Area teen attacked by crocodile while vacationing in Mexico
Video: Dog thrown from truck in West Hills crash
OC restaurant requires customers to prove they are not vaccinated
Simone Biles explains why she 'took a step back' from team finals
More TOP STORIES News