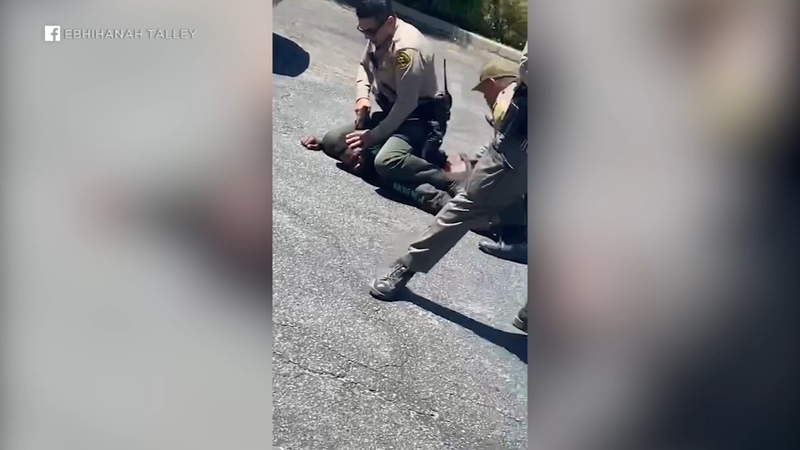 LANCASTER, Calif. (KABC) -- A video of an arrest in Lancaster in which a Black man is lying on the ground and compliant but a sheriff's deputy keeps a gun pressed against his head is sparking protests and new calls for reform.

The video which is going viral only shows part of the incident, in which Los Angeles County sheriff's deputies have a man on the ground in a gas station parking lot. It does not portray what led to the arrest.

The man is lying flat on his stomach and does not appear to be struggling. A deputy is on his back and continues to keep his weapon pressed against the back of the suspect's head.

A crowd begins to grow and several people begin shouting at the deputies, questioning why they felt the need to keep the gun on him when he was not resisting.

"Take your gun off his head," one person in the crowd says.

As the man is being taken into custody, a deputy walks away from the scene, showing the crowd the handgun he seized from the suspect.

"Did he even pull it out? He didn't pull it out," one person in the crowd says.

The incident happened April 30 near Division Street and East Avenue J in Lancaster.

The sheriff's department later said the suspect was armed with a loaded handgun with an extended high capacity magazine.

The department said it has launched a review of its own policy and tactics as a result of the incident.
A department statement reads:

"During the incident, a deputy detained an armed suspect. A crowd of bystanders began to form, and additional deputies arrived before the suspect was taken into custody. As a result of that interaction, the Sheriff's Department has directed an in-depth review of our policy and tactics. The suspect was in possession of a loaded handgun with an extended high capacity magazine. The suspect was not injured during the incident. The incident was captured on the deputy's body worn camera."

The incident began when a deputy on patrol saw what he thought was a drug transaction, the Los Angeles Times reported. The suspect ran away and the deputy followed, at one point spotting what he believed to be the outline of a gun on the suspect's body. The deputy ordered him to stop and detained him at gunpoint in the parking lot of a gas station. That was the point where the bystander video begins.

On Friday, activists gathered in Lancaster to protest the incident. Many of those who gathered are already part of an effort to cancel the Los Angeles County Sheriff's Department contract to provide law enforcement to the cities of Palmdale and Lancaster.

"Vote your power back. Cancel the contract," said activist Arthur Calloway at the rally.

"Don't let them bail these guys out by saying oh they found a weapon. It is not fair that they do illegal stuff after somebody does something illegal. They're supposed to uphold the law. Doesn't mean you get to not uphold it just because you find something illegal."
Report a correction or typo
Related topics:
lancasterlos angeles countyarrestviral videolos angeles county sheriff's departmentpolice
Copyright © 2021 KABC-TV. All Rights Reserved.
TOP STORIES
Newsom picks 10 winners of $15M to celebrate reopening
California reopens today - what changes?
LA County reflects on progress since peak of pandemic
SoCal nonprofits benefiting from MacKenzie Scott donations
Senate passes bill making Juneteenth a federal holiday
UC will require students, faculty and staff to be vaccinated
3,000 unruly passengers so far this year -- 2,300 cases over mask wearing: FAA
Show More
Ex-CA Rep. Rohrabacher confirms he was at Capitol riot
More than 30 pelicans mutilated on OC coast
Judge rules Harvey Weinstein be transferred to LA to face sex charges
Mexican band Los Bukis reunites in LA after 25 years
Newsom says vaccinated CA workers won't have to wear masks after June 17
More TOP STORIES News