VIDEO: Pedestrian struck by car in South Los Angeles while taking part in vigil for cyclist killed in crash 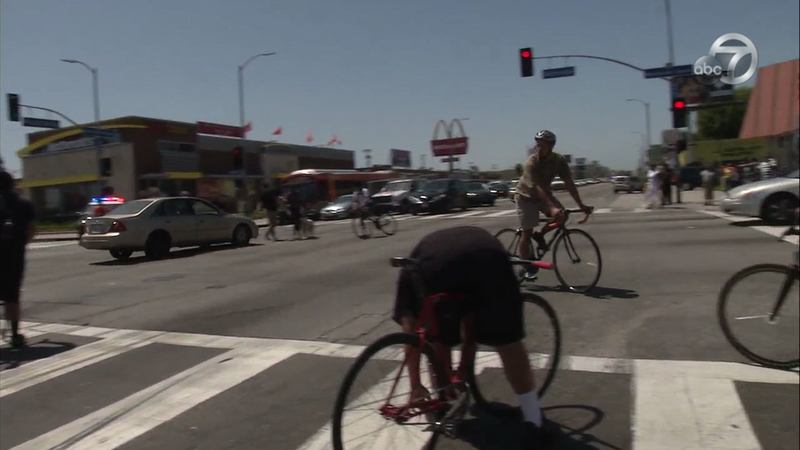 VIDEO: Pedestrian struck by car while at vigil in South LA

SOUTH LOS ANGELES (KABC) -- A pedestrian was struck by a car in South Los Angeles Wednesday while taking part in a vigil for a cyclist killed in a crash a day before.

A group of bicyclists gathered to hold the vigil near Manchester and Normandie avenues. When they began blocking an intersection, a police officer arrived at the scene.

The group, who were all friends of the bicyclist they identified as Fredrick Frasier Jr., then began hitting the patrol vehicle with their bicycles.

While this chaos was unfolding, a driver in a tan sedan, possibly a Toyota Avalon, appeared to deliberately plow through the crowd, hitting a young man. The driver sped off, while the man hobbled over to the sidewalk and fell to the ground.

More police units and firefighters arrived on scene to help the pedestrian, identified as Quatrell Stallings. He appeared to be bleeding and tried to stay awake as he sat on the ground.

He was taken to a hospital in an unknown condition.

#BREAKING: Pedestrian hit by a car at Manchester and Normandile. He and dozens had blocked the street after a ciyclist was struck by a car and killed yesterday. pic.twitter.com/s1IYtcy9Qf

Just moments before Stallings was struck, he spoke with Eyewitness News about the impact his friend Frasier had on his life.

"When he developed and started being fast - he gave nobody no mercy. He inspired me to get back on my bike," he said.

Another witness at the event said Stallings got into an argument with the driver, a woman, before she hit him with her vehicle.

"She got into a dispute with one of our bikers...when things didn't go her way, she came down Manchester, did a U-turn, and sped back into traffic. She swerved through a bunch of bikers and Trell pushed a lady out of the way and then when he turned around, she hit him," Moses Williams said.

The fatal crash involving 22-year-old Frasier happened on Tuesday, and it was also a hit-and run. Police were searching for a white Porsche Cayenne SUV in connection to the incident.

Authorities said the Cayenne should have extensive front-end damage.