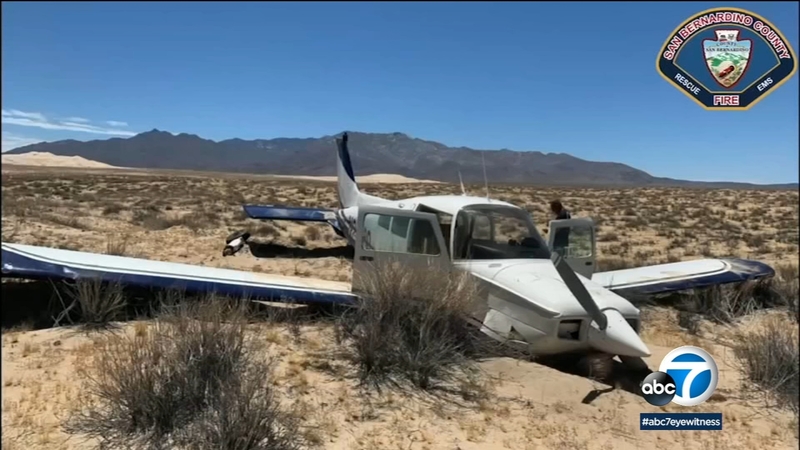 LUDLOW, Calif. (KABC) -- A pilot and passenger walked away unscathed after an emergency crash landing in San Bernardino County over the weekend, according to fire officials.

The pilot says they were traveling from Needles to Chino in a small, single-engine plane when things took a turn.

Video from inside the aircraft shows the moments after the Beechcraft Sundowner's engine suddenly lost oil pressure and stalled.

Because there were no airfields in the area, the pilot was forced to make an emergency landing in a remote region of the Mojave National Preserve near Ludlow.

"The aircraft came to rest in an area west of... Kelso Dunes. It's a very remote area of the Mojave National Preserve. Everything looks alike, it's hard to tell the difference if you can see the train tracks to the north or Interstate 40 to the south. They are deceptively far away," Sherwin said.

The pilot and passenger were uninjured but they were miles away from the nearest road, so a fire department rescue helicopter was sent to rescue them from the triple-digit heat, officials said.

Not only was the pilot able to successfully bring the plane down for an emergency landing, he was able to make sure others knew about his location.

"As he was descending, he could no longer reach out to center, however he could speak on another frequency to other aircraft at upper altitudes, and was able to relay his position and situation and what ultimately wound up taking place," said Sherwin.

Once the helicopter spotted them, they were able to transport them out of the elements to wait for ground transportation.

"We've seen a significant number of aircraft mishaps out in the desert over the years," Sherwin said. "This is not typically how they end."
Report a correction or typo
Related topics:
ludlowsan bernardino countyplane accidentcaught on tapeflight emergencyplane crashcrash
Copyright © 2021 KABC-TV. All Rights Reserved.
More Videos
From CNN Newsource affiliates
TOP STORIES