Video shows events leading up to death of inmate at L.A. County jail 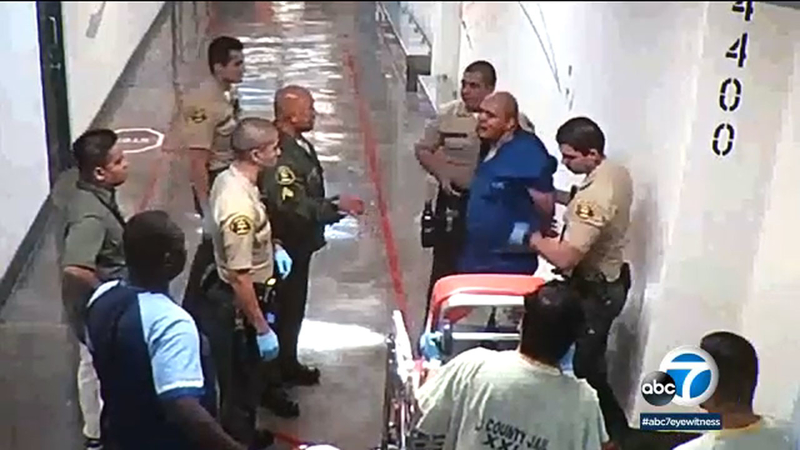 Video shows events leading up to death of inmate at L.A. County jail

LOS ANGELES (KABC) -- The family of a man who died at a Los Angeles County jail nearly two years ago is speaking out after video released shows the events leading up to his death.

"I'm here because I'm looking for justice for my son Juan Correa," Maria Correa told a roomful of reporters.

Along with their lawyers, Maria and Juan Correa Sr. talked about their wrongful death lawsuit against Los Angeles County and the sheriff's department.

They presented a video that the L.A. County Sheriff's Department provided them on what happened the day their son, Juan Correa Jr., died in sheriff's custody at the Twin Towers Correctional Facility.

Juan Correa Sr. says his son came into the jail system because of his mental disability, not because he committed a crime.

The Correas say their 31-year-old son suffered from mental illness. He was in an area of the Twin Towers for inmates who have mental health issues.

The Correas and their lawyers say Juan Correa Jr. was placed in the general population with an inmate with violent tendencies. There was a fight and the video shows deputies using pepper spray to break it up. Correa was removed from the cell and the video shows him having difficulties.

According to the family lawyers, within an hour, the video shows Correa was pronounced dead in the jail shower.

"After Juan, their son, is pepper sprayed, they don't attend to his medical needs," family attorney Michael Carrillo says. "He clearly can't hold himself up while he's sitting. He can't stand, he can't breathe. When they throw him in the shower they're yelling at him, they're pointing at him."

The incident happened in September of 2017.

The Correas are suing L.A. County and the sheriff's department. The county said it will "reserve comment on pending litigation."

"My son was innocent, he was an innocent boy with mental disabilities," Juan Correa Sr. says. "But, you know, I hope justice will come to this."