KABC
By ABC7.com staff
PORTER RANCH, LOS ANGELES (KABC) -- The Los Angeles Police Department on Saturday released body camera footage that shows a June 20 incident in which an officer shot and wounded a man suspected of stabbing his ex-wife in Porter Ranch.

The videos depict the evening confrontation from the vantage points of multiple LAPD officers, who responded to the 20000 block of Sardinia Way after an ambulance's radio call indicating a female victim had been stabbed. They arrived to find the victim on the ground, surrounded by neighbors who were tending to her.

"The officers' attention was then drawn to a male suspect, later identified as Alen Alpanian, who was standing outside the front door of the residence holding a kitchen-type knife," the LAPD said in a statement.

In the released footage, police are repeatedly heard ordering Alpanian to drop the knife.

"Drop it, right now!" a voice yells as Alpanian walks toward them on the residential street. A policeman then instructs a fellow officer: "Beanbag him, right now!"

Beanbag rounds and a Taser were deployed without success, authorities said.

"Alpanian continued to walk toward the officers while holding the knife, which resulted in an officer-involved shooting," the news release said. Six shots were fired.

It was unclear how many times the suspect was struck; he was hospitalized in stable condition.

The police department also released the 911 call that preceded the shooting.

Alpanian's ex-wife was rushed to a medical center, where she underwent surgery and was listed in critical but stable condition. 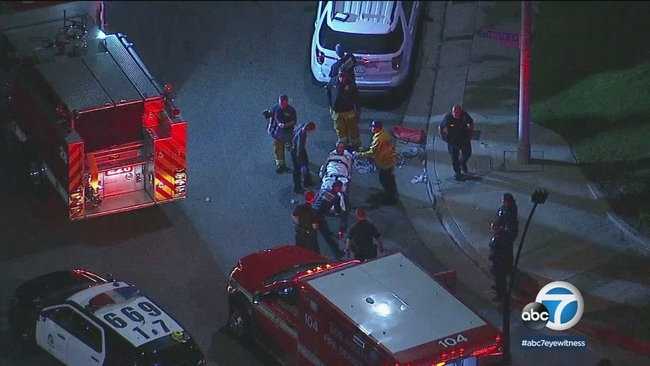