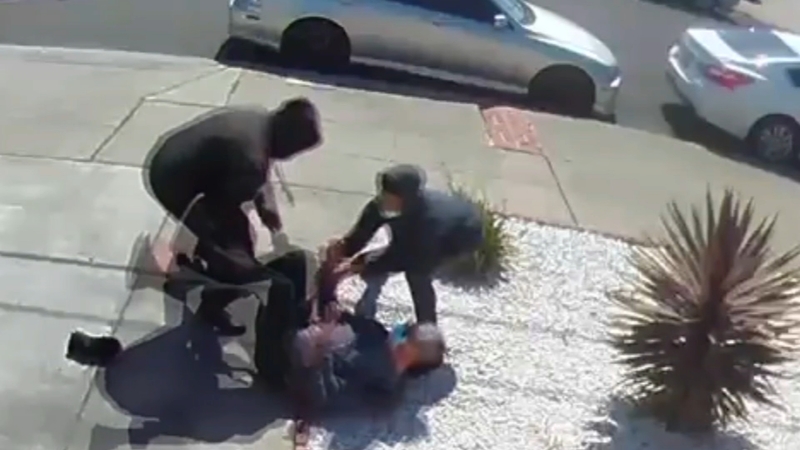 What is perhaps even more distressing than watching surveillance video of the senior get knocked to the ground by the two teens on Saturday, is hearing his calls for help and the high-pitched giggles coming from another teen, presumed to be in the getaway car nearby.

Police in San Leandro, where the attack happened, say the suspects involved are as young as 16.

"It's crazy to see kids that age doing that kind of stuff, going down that road already," says the man who recorded the video from his home and only wants to be referred to as "Marcos" out of safety.

The 80-year old victim from Saturday's attack was robbed of a watch and sustained minor injuries. He believes the crime was hate-motivated. Police say because the victim called out for help the suspects took off. However, a similar vehicle was seen in a strong-armed robbery in San Leandro less than two hours later. The victim in that incident is described as a younger woman who was robbed of her purse.

Like much of the Bay Area, San Leandro is no stranger to attacks on Asian Americas.

From a woman placing hate-filled letters on resident's doors demanding Asians leave the country immediately back in May of 2020, to a brazen daytime robbery outside a Bank of America where an older Asian man was knocked to the ground and unable to get up.

San Leandro police Lt. Ali Kahn says they were shocked when the chief received the results of a victim demographic study.

"We were equally as shocked. From 2019 to 2020 we saw an almost 300% increase in crimes towards our Asian and Pacific Islander community members," Kahn said.

While police can't say for certain how many incidents are hate crimes or were race-motivated, Kahn says the numbers don't lie. In response, the department has boosted patrol numbers and is working with the D.A. on finding solutions to the challenges of dealing with minors who are released only to re-offend.

Kahn recalled a recent string of incidents several weeks ago where a rash of carjackings and burglaries committed by juveniles. That brought up questions on how to solve the problem.

"Other than putting juveniles in jail what other avenues can we have to maybe divert some of the things that are happening?" Kahn said.

As for the man who captured the latest attack on his family's security camera, he wants only one thing for those who try to disrupt his otherwise quiet community.

"More consequences. Because it seems to be ongoing... It's really the best thing that can happen, so they can learn," the man said.