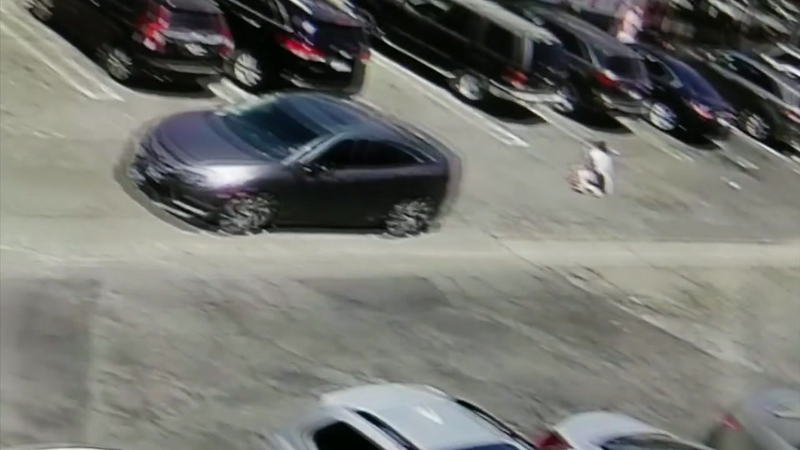 KOREATOWN, LOS ANGELES (KABC) -- Two men snatched a woman's purse at a Koreatown mall and dragged her through the parking lot before they sped off in a vehicle.

Surveillance video captured the moment Judy Cho walked behind her car. The suspect got out of his vehicle and grabbed her purse. It only lasted a few seconds and then the car drove off, with Cho dragged across the parking lot.

"Oh my gosh I was thinking about my daughter, so I had to let go, let me just leave, let me just save my life," Judy Cho recalled.

The crime happened Sunday at the Rodeo Galleria Shopping Center. Judy Cho's daughter was in the backseat at the time. Her mother-in-law tried to help but she was also knocked to the ground and suffered a broken rib.

Judy Cho has bruises on both her arms and scratches on her side from when she was dragged.

"I bumped my head first. I have a headache still and all the pain in my neck, my shoulders, both sides, my back, my legs," she said.

The family said the suspect's car is seen on surveillance video going around and around in the parking lot. They feel it should have caught the attention of security.

"The car was basically loitering around the parking lot, and looking from the video footage that I saw, they were basically looking for their prey, their victim" said Seong Cho, the victim's husband.

People in the mall said there has been an increase in small thefts in the last few weeks. On July 15, there was another purse snatching. The suspects in that case didn't use a car, they grabbed the purse and ran off.

Eyewitness News called investigators, but they couldn't talk about the case on Thursday.

As for the family, they said they can replace credit cards and other property, but some things they can't replace.