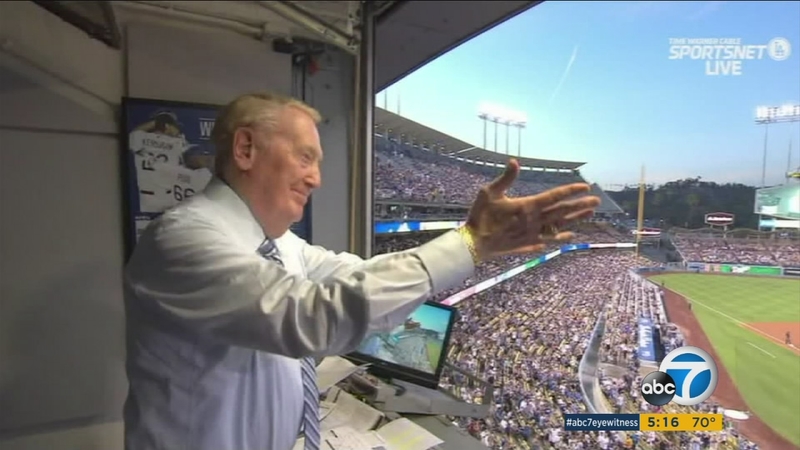 The renamed road sits along a stretch of Elysian Park Avenue between Sunset Boulevard and Stadium Way.

The Los Angeles City Council approved the name change and voted Friday to give its final approval.

Scully stepped up to the podium and said he felt "overwhelmed" about the entire event.

He recalled growing up in New York as a "street kid," playing baseball with a stick and a tennis ball.

What will he miss the most when he leaves the job?

"The roar of the crowd. That's what I'm going to miss the most," he said. "I don't know you, and I miss you, believe me, each and every one of you."

Dodger legend Vin Scully admitted feeling overwhelmed during his street-naming ceremony as he thanked Dodger fans for all their love and support throughout his long career.

As a child, Scully remembered getting goosebumps when he heard the roar of college football fans on his family stereo. This sparked an interest in broadcasting, he said.

"When you folks are at the ballpark and something happens and you let out a roar, I sit there in the booth, and I don't say a word," Scully said. "For during that 40 seconds whatever, I'm 8 years old again."

He laughed in response but politely said this season will still be his last.

"I've done enough. I've said almost everything," he said in closing. "Maybe on the final day of my final broadcast, I'll somehow come up with the magic words that you deserve. As for now, I have only two magic words: Thank you."

Scully began broadcasting Dodgers games in 1950, when the team played in Brooklyn. The Bronx native said in August that the 2016 season will be his last behind the microphone.