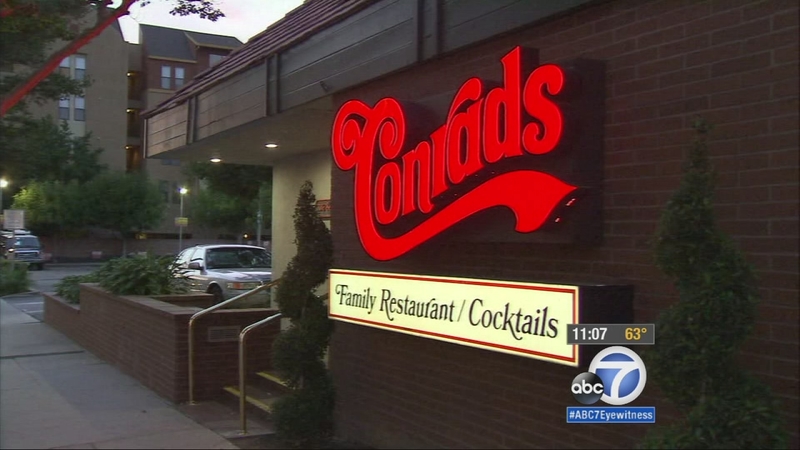 PASADENA, Calif. (KABC) -- A customer at a Pasadena restaurant said she invited a homeless man to eat with her and her son, but the man was then told to take his food to go by the owner.

Conrad's Family Restaurant has been in business for 40 years. Florencia Albert has eaten there over the years, but now she won't go back because of how they treated the homeless man.

Albert invited him into the restaurant for a meal Saturday morning.

"I thought to myself, 'Well if he asked me for money, I'll buy him some food.' Instead he asked me for French toast," she said. "I told them that I was buying breakfast for the gentleman and if they could please send his bill to me. They looked a little surprised and they said OK."

She said the man left before being served because the owner told him he could only take the food to go. Albert brought the man back to the restaurant to eat his breakfast.

The owner of Conrad's disputes that part of the story and said the man was panhandling before Albert arrived. Police were also called to the restaurant.

Frank Gooch, the owner's attorney, said the man was not kicked out of the restaurant.

"He was not refused service. He was given service, and there was no intention of ever having him thrown out. Although the police officer who came indicated that was an option that the family had," he said.

"It was not fair and I felt like I wanted to stand up for his right to have a dignified meal," she said.

She even posted a photo of the note she left at the restaurant on her Facebook page and told her side of the story. That post has been shared by thousands of people, and now users on Yelp are giving Conrad's bad reviews.

"The family has a history of giving to the community, and you can imagine how emotional this is for the entire family," Gooch said.

But one long-time customer said Albert's experience won't deter him from dining at Conrad's.

"You can see how a social media experience can kind of take over without giving the other person [a chance] to give their side of the story, to refute or substantiate or whatever. So that's unfortunate," Everard Williams, Jr. said.