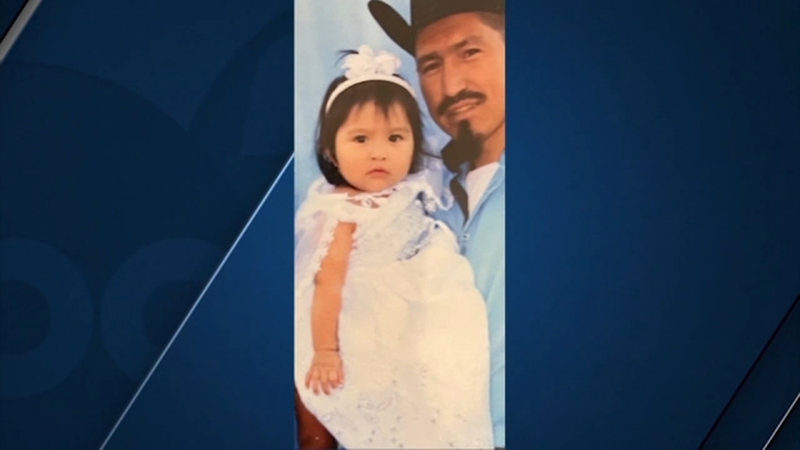 VISALIA, Calif. -- Last week, Ruben Campos Barrios found out his 3-year-old daughter, Jessica Campos, died after being left in a scorching hot car for two and a half to three hours.

It comes just months after he lost his 8-year-old son, Jessica's brother, to brain cancer.

"So he just wanted to die, he didn't want to be alive because that was his main reason to live," one of Barrios' family members told ABC7's sister station KFSN as they translated for him.

Ruben's ex-girlfriend and Jessica's mother, 28-year-old Eustajia Mojica, has been charged with involuntary manslaughter and child abuse in connection to Jessica's death.

Visalia police say she drove to her sister's house last Thursday afternoon with her three children, but left Jessica behind in the car when they parked outside of the home.

Mojica, police say, then tended to an illegal marijuana grow while her other children went swimming.

Eventually, Mojica realized her daughter was missing, and found her laying down in the car's backseat, unresponsive.

In their reports, police say Mojica told them she saw her kids outside of the car when they arrived at the house, but said "she had a lot going through her mind because she had just recently lost one of her children."

Mojica also told police that she had gotten used to letting the kids get out of the car on their own, but that her other child who would usually help Jessica get out of the car would frequently close the door on Jessica and leave her trapped inside.

"She would run towards him, saying, 'Daddy, daddy,'" the family member said. "After work, when he would come out, she would want him to take her to the store every day and whenever he would go to work, she would want to go work with him."

Police reports even detail how Ruben would remind Mojica to be careful about leaving kids inside of hot cars.

In a statement of probable cause to arrest Mojica, Visalia police described the tests they conducted inside Mojica's car the day after Jessica died. Temperatures reached a high of 131 degrees.

Ruben is crushed by his daughter's death, but he hopes all adults can learn something from her tragic story.

"To pay attention to their kids whenever they stay at the car, because it happened to him and it could happen to other people," the family member said.

Mojica is scheduled to be back in court next Tuesday. She's being held at the Tulare County Adult Pre-Trial Facility. If convicted, she faces 10 years in prison.