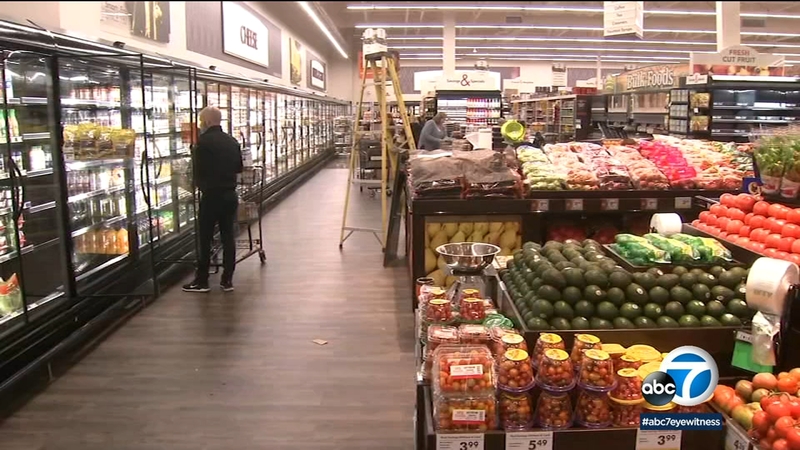 WATTS, LOS ANGELES (KABC) -- Smart and Final and other stores are opening in a new shopping center in Watts across from a public housing complex, a welcome addition to a neighborhood that has a shortage of quality food options.

Derrick Harrington says having a grocery store across the street from his home means the quality of life for his family and his neighbors just got better.

"It'll be a plus for the community," he said. "It'll help, especially for me. I have six kids so for me to be able to walk right here and get something fresh and bring it back to the house it'll be no problem so I don't have to waste gas to go further than what I should be."

Gisela Yanez, who also lives close by, says "I want the best for my kids, I want the best vegetables, and the meat to be good, in good condition because I have bad experience in other stores."

This area of Watts is classified by the U.S. Department of Agriculture as an urban food desert - where at least 100 households are more than half a mile away from the nearest supermarket and have no vehicle access. Throughout Los Angeles County there are 150 areas classified as food deserts.

INTERACTIVE MAP: This map shows census tracts in Southern California that are designated as food deserts by the U.S. Department of Agriculture. Red areas are food deserts, and yellow areas are not. Zoom out to see more areas of SoCal.

Note: These food deserts are defined as areas where at least 100 households are more than half a mile away from the nearest supermarket and have no vehicle access.

Back in 1992 there was a Smart and Final in Watts but it was destroyed by fire during the L.A. Riots.

Nearly 30 years later it's back. And with it are full and part-time jobs.

Joshua Callahan says "I have two friends who have been hired here at Smart and Final. One works at the night crew and the other works in the freezer section who I actually knew since elementary school."