Brief round of rain, snow and strong winds hit SoCal 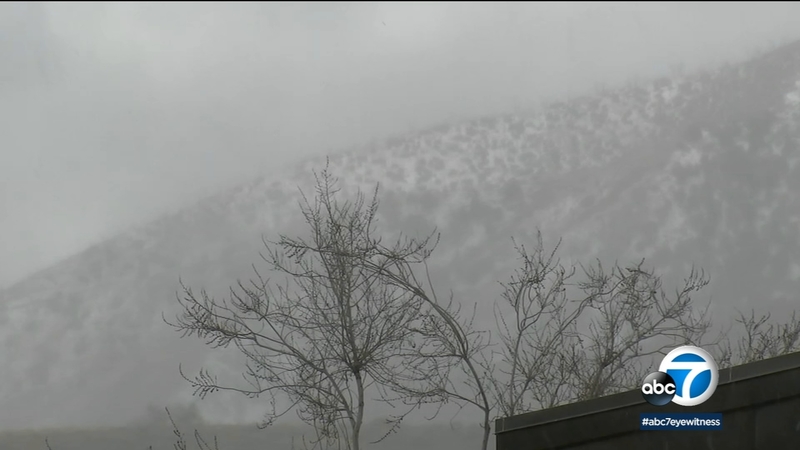 Brief round of rain, snow and strong winds hit SoCal

Snow levels dropped below 3,000 feet, covering mountain communities and creating slick road conditions along the Grapevine section of Interstate 5, prompting California Highway Patrol to escort traffic in the area in the evening. Residents in the area are still cautious a freeway shutdown could happen later.

Shortly after 9 p.m. Monday, the 5 through the Grapevine was fully closed to traffic in both directions due to snow on the road, Caltrans said. The major thoroughfare reopened Tuesday around 5 a.m.

Most of the heavy rain fell in the early to midmorning hours, making for a slippery commute to work. Dry weather and slightly warmer temperatures return Tuesday and remain for the rest of the week.

A slight chance of showers was forecast this afternoon, with a wind advisory in effect in the Los Angeles area through 7 p.m., with temperatures maxing out in the mid-50s.

A brief cold system is expected to move through the Southland Monday, bringing rain, snow and gusty winds.

The NWS also said to plan on slippery road conditions and possible road delays or closures. Light snow accumulations were expected on Interstate 5 over the Grapevine, Angeles Crest Highway, and Highway 33 and Lockwood Valley Road in northern Ventura County.

In addition, a wind advisory is in effect from 11 a.m. to 7 p.m. Monday for Los Angeles and vicinity, with gusts to 45 mph, strongest at the beaches.

A cold weather alert was also in effect through Monday for the mountains and the Antelope Valley, where temperatures will drop into the 20 and 30s at night.