KABC
By Rob McMillan
CAJON PASS, Calif. (KABC) -- Firefighters who were on a fire truck just moments before it plunged over the side of the 15 Freeway in the Cajon Pass recalled the dramatic scene.

Eyewitness News captured exclusive video of the frightening sight during an intense storm the night of Feb. 17.

"It was hard seeing it go over because the way it landed, you knew that if we were in that our chance of survival was slim to none," Capt. Jason Pitsor with the San Bernardino County Fire Department said.

A fire truck fell over the side of the 15 Freeway in the Cajon Pass as the road gave way. Firefighters had already evacuated the vehicle and no injuries were reported.

Pitsor, engineer Terry Payton and firefighter Danny Carmichael were headed to a report of a crash on the 15 Freeway heading southbound.

Payton, who was driving, looked over his shoulder as he merged onto the freeway.

Pitsor, who was riding in the front passenger seat, looked up from his computer screen to make a horrifying discovery.

"There was absolutely no freeway in front of us," Pitsor recalled.

Driving close to 45 mph, the fire truck was heading right toward a portion of the freeway that had already crumbled away.

"It took me a couple seconds to actually process what I was seeing. At that point, that's when I just screamed Terry's name," Pitsor said.

"I just cranked the wheel left and I just gassed it," Payton explained. "It was just violent scraping and grinding. Then when we hit the other end it was a pretty violent jolt."

"I thought our back tire blew and we were fishtailing off the road," Carmichael said.

The engine came to a stop, but the crew inside could feel the fire truck teetering on the edge.

"That's when I looked out the window and saw the rushing water, a good 30 feet below us, and I think I yelled, 'There's no road! It's gone,'" Carmichael recalled.

The men knew they had to get out of the fire truck, but said they didn't want to move too quickly.

"We were worried about a weight shift. What's going to be the best? Who gets out? Does Terry get out, do I get out or does Danny?" Pitsor said.

Payton was able to jump out through the door on the driver side while Pitsor and Carmichael escaped out the right-hand side onto a section of freeway that only moments later would give way.

The thought wasn't lost on the crew that if their vehicle wasn't the one that went off the edge, it likely could have been someone else.

"Where our engine ended up, if we weren't there, there was going to be numerous vehicles that would've gone into the water," Pitsor said.

Officials estimated that repairing the section of the road that washed away would cost about $3 million.

The fire truck, which costs about $600,000, was considered a total loss, though firefighters were able to salvage about $100,000 worth of equipment.
Related topics:
weathercajon junctionsan bernardino countyi 15road safetyfirefightersstorm damageroad repair
Copyright © 2020 KABC-TV. All Rights Reserved.
RELATED 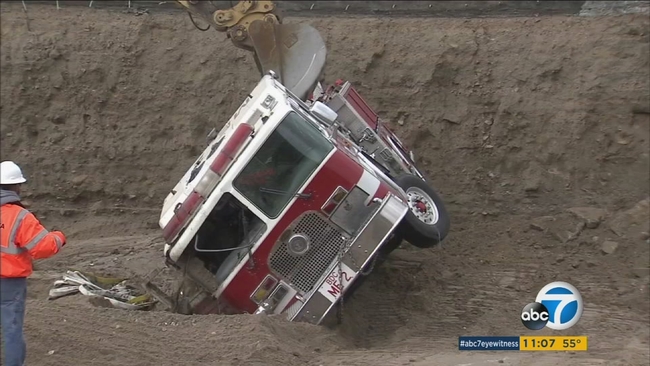