Drought restrictions to remain in place despite California's intense rain

KABC
By Rob Hayes
LOS ANGELES (KABC) -- After years of drought, California is finally getting an abundance of rainfall, but on Wednesday, the State Water Resources Control Board extended the state's emergency drought regulations.

The debate over California's current water supply has grown contentious. Snowpack over the winter has been exceptional, with the Los Angeles Department of Water and Power saying it sits at 182 percent of normal.

Last winter, California reservoirs were dramatically low, but this year they are filled. Because of what people are seeing, some said it totally made sense to rollback state drought limits rather than keep them in place.

"I'm concerned that the state of California is going to be looked upon as giving 'fake news' to many people thinking that there's still a drought when it's evaporated away," said David Breninger, with the Mountain Counties Water Resources Association.

The state's drought controls, which were initially mandated by Gov. Jerry Brown in 2014, were relaxed last year, and local water districts were left to set their own conservation levels.

While some believe the state is no longer in a drought, other people worry the recent rains aren't enough to erase years of a parched state.

"This is the first year we've had this amount of rain in a really, really long time. So let's just pray for more rain, and maybe in a year or two, when it's consistent, then let's think about that," Atwater Village resident Rheena Mae said.

On Thursday, the U.S. Drought Monitor released a new image of the current conditions in the state after another rain storm hit this week.

Now only parts of Ventura and Santa Barbara counties, along with a small northeastern portion of Los Angeles County still face extreme drought conditions. As for the rest of the state, much of it, including SoCal, face severe to moderate drought conditions. 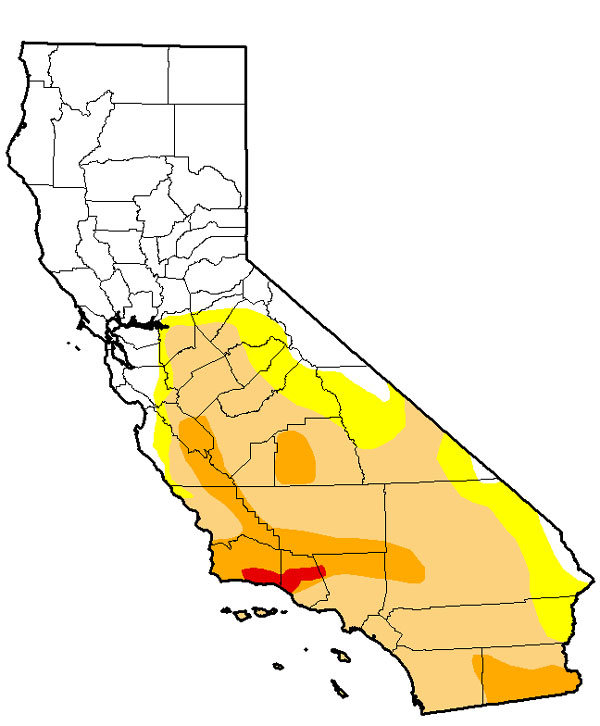 This image shows the current drought conditions in California as of Feb. 7, 2017, according to the U.S. Drought Monitor.