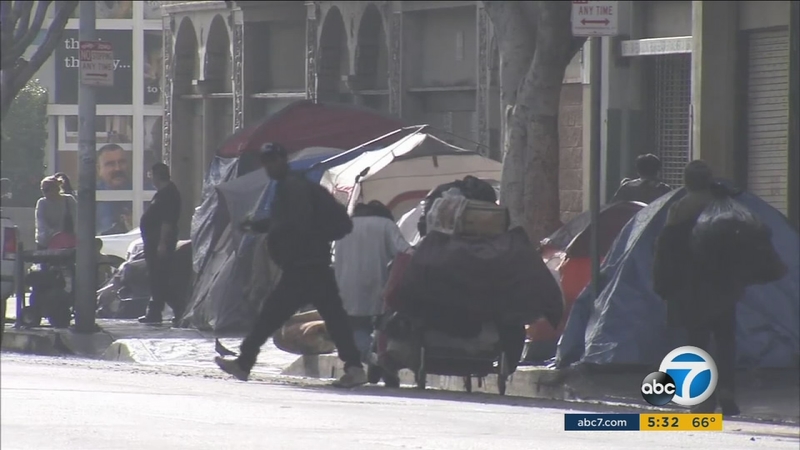 LOS ANGELES (KABC) -- As the Southland gears up for El Nino, officials say some areas that have never been flooded before will be hit hard, and the homeless are especially at risk.

During the last round of heavy rain, flash flooding caused the Los Angeles River to overflow. This caused a homeless encampment to be flooded, and people had to be rescued.

El Nino rains promise there will be more of the same - threatening lives and draining government budgets. On Thursday, FEMA conducted mock drills.

Disaster plans focus increasingly on areas of California that could be inundated - where one in five residents live.

"Flooding is still the No. 1 natural disaster that causes the most damage across the United States and the most deaths each year," said Mark Ghilarducci with the California Office of Emergency Services.

FEMA says 30 percent of that damage happens where it was not anticipated. That unknown factor only multiplies the risk for an estimated 26,000 people in Los Angeles County who have no housing.

"We all feel here today that the urgency of this crisis cannot be overstated," said Los Angeles Mayor Eric Garcetti.

On Wednesday, Garcetti announced the City Council's authorization of $12.5 million to pay for housing vouchers good for one year. It will help 1,000 people who are homeless. Half will be veterans.

Still, it leaves nearly 9,000 people in L.A. alone who will remain camped out. The mayor says as the city searches for more funds, there is frustration with FEMA. Federal money is not available until after an emergency strikes.

"Why should we wait until someone dies if we can shelter them ahead of time?" Garcetti asked.

Another challenge - the people in encampments who do not want to leave. Sharon Horton, who lives in a tent, says she does have family but she gets support from her community on the street.

"When I was in my addiction these people became my family and that is just the way it is," Horton said, fighting off tears. "And now that I am trying to do better, I still sleep and come this way."

As for the outlook for her safety and thousands more, Garcetti said he is confident about the preparations taken by the city and its county partners, but admitted that Mother Nature is unpredictable.

"I will never state that I am confident that we won't lose lives or things like that. We don't know what's coming," he said.

The mayor said dozens of outreach workers have been hired to head into head into homeless encampments to convince people to relocate before the rain hits.
Related topics:
weatherlos angelessafetyfloodinghomelessel ninostormrainsevere weatherflash flooding
Copyright © 2021 KABC-TV. All Rights Reserved.
EL NINO