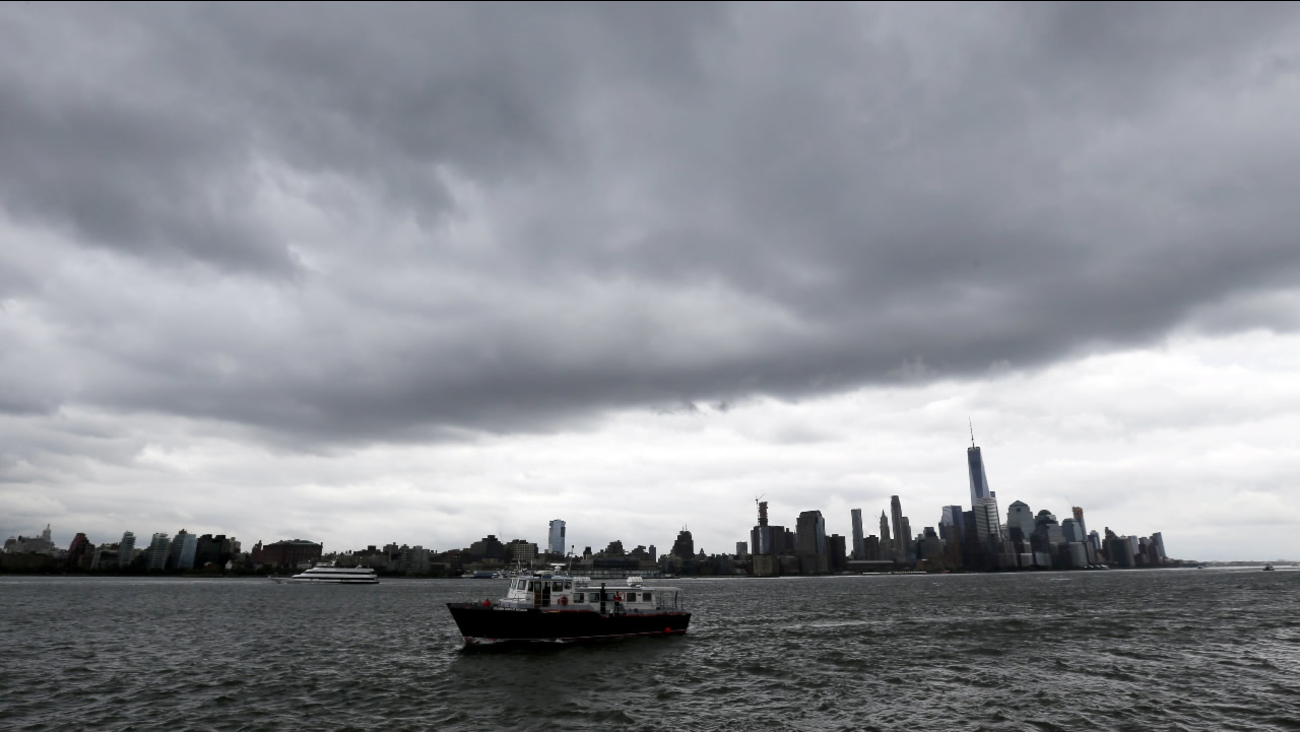 A boat passes Pier A Park on the Hudson River with the New York skyline in the background on Wednesday, Sept. 30, 2015, in Hoboken, N.J. (AP)

MIAMI -- Hurricane Joaquin strengthened into a Category 4 storm on Thursday as it roared through lightly populated islands of the eastern Bahamas, and forecasters said it could grow still more intense before following a path that would near the U.S. East Coast.

There were no immediate reports of casualties as the storm reached the island chain, said Capt. Stephen Russell, the director of the Bahamas National Emergency Management Agency.

The most severe flooding reported so far was on Acklins island, where power went off overnight and phones were down. Russell said some of the roughly 565 people who live there were trapped in their homes.

Bahamas resident Shandira Forbes said she had spoken to her mother on Acklins by phone Thursday.

"She was calling for help because the sea was coming into her house," Forbes said. "People's roofs were lifting up. No one knew (about the storm), so there was no preparedness, there was no meeting, there was nothing."

Flooding also was reported across parts of Long Island, but no one had been injured, said Parliament member Loretta Butler Turner.

"We will have to wait for the winds to die down before we can go out and really assess the damage," she said.

Islands such as San Salvador, Cat Island and Rum Cay were expected to be hit hardest before the storm begins an expected shift toward the north, forecasters said.

"Everyone is just trying to get their stuff battened down," said Frances Missick, chief councilor of Rum Cay, which has a population of about 100 and 40 homes.

Missick and other people on the small island gathered in a shelter set up at the St. Christopher Anglican Church. As of Thursday, there was only minor flooding and power and water were still running.

Joaquin had maximum sustained winds of 130 mph (210 kph) and hurricane strength winds extending 45 miles (75 kilometers) from the eye, the U.S. National Hurricane Center in Miami said. As of 2 p.m. EDT, the storm was located about 70 miles (115 kilometers) south-southeast of San Salvador island after passing over Samana Cays, Bahamas. It was moving southwest at 6 mph (9 kph).

While Samana Cays is usually uninhabited, eight to 10 people were working there, staying in temporary housing, when the storm hit, said Parliament member Alfred Gray.

"If the buildings look like they won't withstand, there are some caves on the side of the rock that they can go into because it's not prone to flooding," he said.

The storm was predicted to turn to the north and northwest toward the United States on Friday, but forecasters were trying to determine how it might affect the U.S. East Coast, which was already suffering flooding and heavy rains from separate storms.

"There's still a distinct possibility that his could make landfall somewhere in the U.S.," said Dennis Feltgen, a meteorologist and hurricane center spokesman.

The Hurricane Center said parts of the Bahamas could see storm surge raising sea levels 5 to 10 feet (as much as 3 meters) above normal, with 10 to 15 inches (250 to 380 millimeters) of rain falling on the central Bahamas.

The U.S. National Hurricane Center's long-term forecast showed the storm could near the U.S. East Coast along North Carolina and Virginia on Sunday or Monday.