Hurricane Rosa to bring high surf, half inch of rain to Southern California 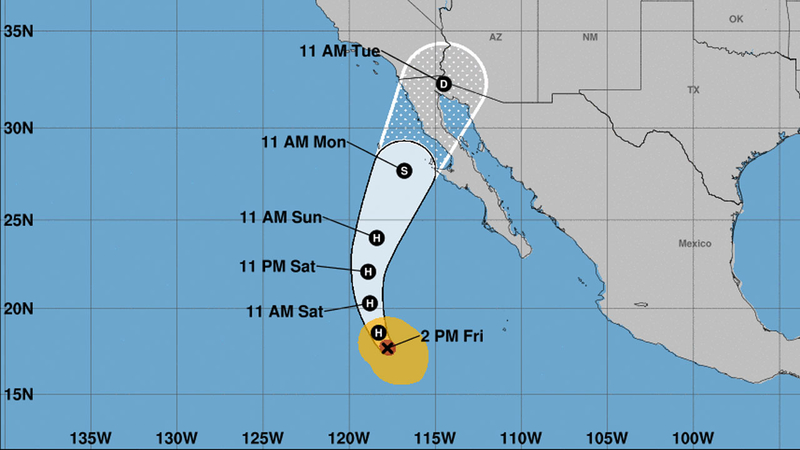 Hurricane Rosa to sprinkle SoCal with half inch of rain

LOS ANGELES (KABC) -- There's a hurricane slogging toward the Southern California coastline, but it likely won't bring more than a half inch of rain to the thirsty Southland.

Hurricane Rosa formed off Mexico's coast in the Pacific this week and began moving up toward Baja California, strengthening and then weakening again by Friday.

The Category 3 storm had maximum sustained winds of 120 mph and was located 625 miles southwest of the southern tip of Baja California Friday. It was moving west at 6 mph.

It is expected to become a tropical storm by late Sunday as it heads northeast toward the Baja California peninsula.

The National Hurricane Center said there were no coastal watches or warnings in effect, but swells generated by Rosa were expected to cause dangerous surf and rip current conditions along portions of southwestern Mexico, the peninsula and Southern California.

The National Weather Service predicted that the storm would bring the "first widespread rain event of the season" to Southern California, with precipitation forecast to fall beginning Monday night and lasting through Wednesday.

Rainfall totals for the region were not expected to exceed half an inch, according to the National Weather Service. The most probable impacts of the storm were expected to be slick roadways and traffic delays, forecasters said.

Here is a preliminary storm total estimate from Monday afternoon through early Wednesday morning. Highest amounts across L.A. County with 1/2 to 1 inch. Bulk of the rain expected Tuesday. These amounts could change based on the track of remnants of #HurricaneRosa #cawx #LArain pic.twitter.com/dInpC3AeZk

Officials in areas recently affected by wildfires were taking no chances, however, even in light of the relatively mild forecast. Riverside County officials were concerned about debris flows near burn scars from the Holy and Cranston fires.

Authorities were telling neighbors in those areas to monitor weather reports, sandbag their homes to prevent damage and be prepared to leave at a moment's notice if a debris flow hits their area.