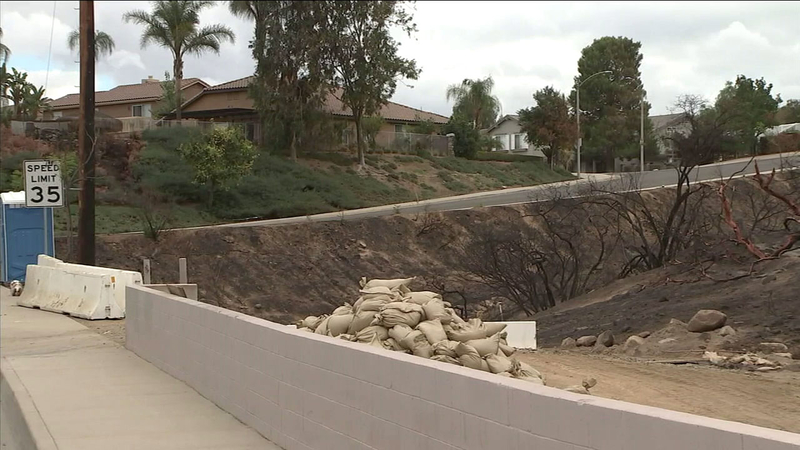 LAKE ELSINORE, Calif. (KABC) -- Preparations for possible mudflows continued near a recent burn area in Lake Elsinore on Wednesday as a storm made its way into the Southland.

Flood control workers used heavy equipment to move debris in a canyon blackened by the Holy Fire in an area of Corona as well. K-rails and sandbags were in place to keep mudflows away.

Voluntary evacuation warnings were issued Tuesday afternoon for neighborhoods in Lake Elsinore and Temescal Valley, not far from where the Holy Fire burned 23,136 acres in the Cleveland National Forest in August.

"It was scary to watch. I didn't think I was going to come back to my house," a man who lives in Lake Elsinore said of the massive brush fire, which was allegedly ignited as an arson incident near Holy Jim and Trabuco canyons.

"We got lucky in that regard but now you're going through this," the homeowner said, referring to the threat of catastrophic flooding. "It's crazy."

"We have done a lot in our backyard," said Ashley Sheffield, noting that her Lake Elsinore home sits near an adjacent hill. "So we put plywood up on our fence and sandbags all through our backyard, trying to do the best that we can.

"I mean, if the mountain comes down it's not going to do anything," she acknowledged. "But if there is some mud it should help."

Meanwhile, rows of K-rails were in place near Rice Canyon Elementary School, where classes remained in session as of Wednesday morning.