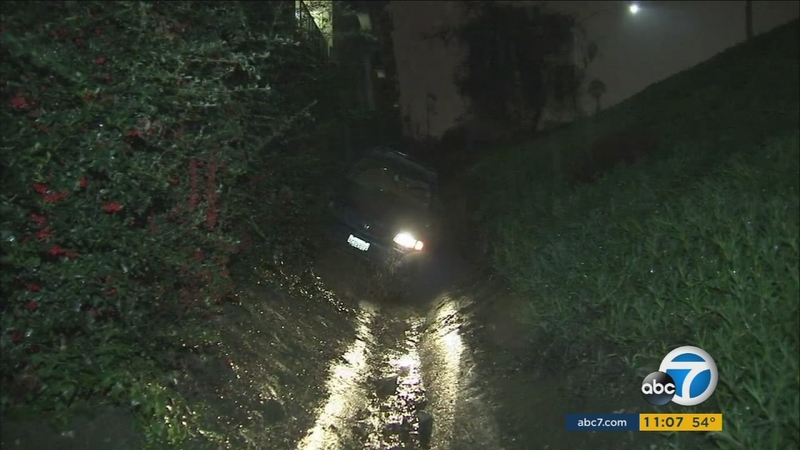 VENICE, Calif. (KABC) -- The biggest and wettest storm of the season slammed the Southland Thursday night, and the soaking rain drenching many areas put Southern Californians on alert.

In Venice, the stormy weather led to a large tree limb to snap and land on a street, blocking the entire roadway of Coeur d'Alene Avenue, which is near two schools.

Near downtown Los Angeles, California Highway Patrol officials said a car traveling from the 110 Freeway to the southbound 101 Freeway drove off the slippery road and crashed into an apartment building in the 900 block of Temple Street. No injuries were reported in the crash.

The wind was howling and rain was coming down in burn areas such as Canyon Country, where the Sand Fire last August left homes at risk during major storms. Residents said it was windy and wet and some roads were closed over fears of mudslides in the area.

Residents in Canyon Country said a SoCal storm caused roads to be closed over fears of mudslides in the area.

Residents in Duarte, near where June's Fish Fire burned more than 4,000 acres, were facing similar fears. Now that the hillsides lie exposed, the city was lining streets with K-rail sandbags in the event of flooding, mud or debris flows.
EMBED More News Videos

Heavy rainfall was expected to last through Friday morning for many parts of the Southland.