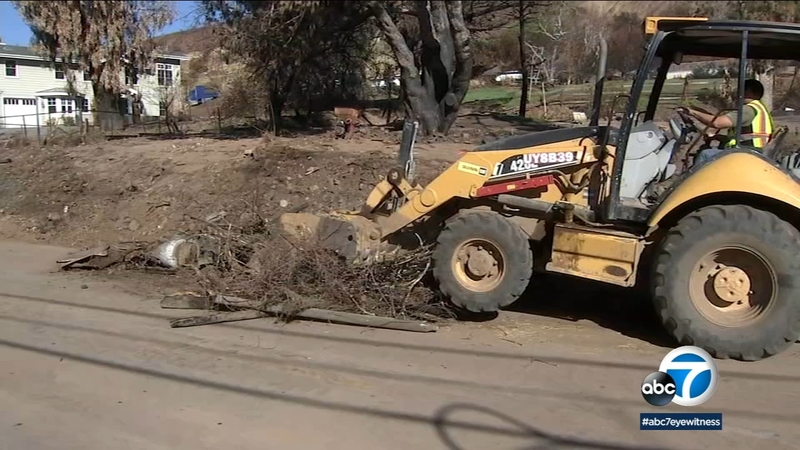 AGOURA HILLS, Calif. (KABC) -- With a storm expected to drop up to an inch of rain on Southern California this weekend, communities in burn areas are bracing themselves for possible mudslides.

Communities like Agoura Hills and Malibu that were hard hit by the Woolsey Fire are cleaning out debris from catch basins and putting up K-rails to try to redirect any possible debris flows.

Storms in December brought flooding and mudslides to a number of communities in burn areas. There is heavy equipment now in position and ready to move quickly if any water or mud flow problems are observed.

Malibu Mayor Jefferson Wagner said the city has been preparing for several weeks for the possibility of rain.

Still, he noted, if the forecast is correct in predicting just an inch of rain, he thinks the city should be OK. The last rainfall helped bring some vegetative growth which would absorb the water.

"You're seeing that green growth at about two to three inches," Wagner said. "That really soaks up a lot of rain. If we just get an inch, we won't see anything."

Caltrans is also warning drivers that snow could fall at elevations of 4,000 feet. Drivers going through mountain passes should carry chains this weekend.

"If they're going to be traveling in the mountain communities, they need to have chains with them and be prepared for any kind of ice on the road," said Shane Massoud with Caltrans.
Report a correction or typo
Related topics:
weatheragoura hillsmalibulos angeles countystormmudslidewoolsey fire
Copyright © 2021 KABC-TV. All Rights Reserved.
More Videos
From CNN Newsource affiliates
TOP STORIES