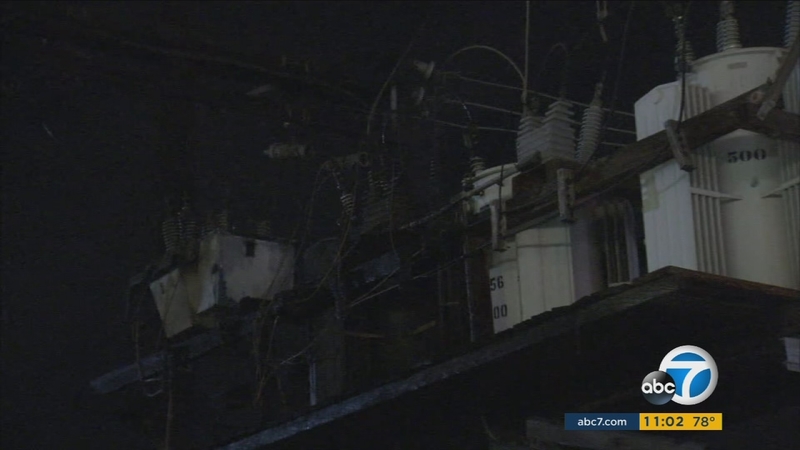 Thousands without power across LA amid heat wave

PANORAMA CITY, LOS ANGELES (KABC) -- Thousands of people in Boyle Heights and surrounding Los Angeles neighborhoods were without power Wednesday amid an intense heat wave sweeping across the Southland.

According to a tweet from the Los Angeles Department of Water and Power, an outage in Boyle Heights left more than 8,200 people without power at its peak. The outage was caused by an overloaded station. Crews were working to restore energy and fix the issue.

Shortly before 9 p.m., the number of people without power was reduced to 6,000. By around 6 a.m. Thursday, LADWP officials said power was restored for all Boyle Heights residents.

#LAHeat it was a long night for you #BoyleHeights. We apologize for the inconvenience. Crews worked fast as they could. All power restored.

In addition to residents in Boyle Heights, the utility company said 3,000 customers in the Hollywood Hills, Reseda, Lake Balboa, Sun Valley, Pacoima and Van Nuys were also affected by outages.

Around 8:15 p.m., three transformers exploded in the 9100 block of North Woodman Avenue in Panorama City, leaving more than 1,400 without power in that area and Arleta.

"We heard some bang, bang, bangs, thinking it could have been gunshots," witness Joseph Martini said. "A fireball that continued as the next one went. Each one as they lit up, exploded. Everybody was kind of worried. We were backing up behind cars."

The number of people affected was reduced to 500 in Arleta by 9:30 p.m. That number was further reduced to 343 customers by 4 a.m. Thursday.

By 6 a.m. Thursday, LADWP said around 800 customers throughout their entire service area remained without power.

Compton residents were impacted as well. Southern California Edison officials said 974 customers in the area were without power as of approximately 3 a.m. Thursday. Power was expected to be restored by 10 a.m., according to SCE.

The heat and outages also affected Metro systems in downtown Los Angeles. An Expo line train stopped at the Pico tunnel. Passengers were ordered off the train and had to walk back to the station.

The outages are one of many that has struck Los Angeles and surrounding areas since the heat wave started earlier this week. On Tuesday night, more than 10,000 people in Northridge were left without electricity.

By approximately 6 a.m., power was restored to roughly 10,500 customers in the area, according to LADWP.

Utility crews in Northridge were installing temporary voltage equipment to help with the outage.

But outages remained in other pockets of the city. The DWP said at least 1,900 customers were still without power as of noon.

The DWP urged Angelenos to conserve power as the demand for air conditioning was expected to continue straining the power grid all week as temperatures remained in the triple digits in the San Fernando Valley and other communities in the area. Woodland Hills in the West Valley is expected to hit 111 degrees Wednesday.

The outages came after California energy authorities urged voluntary conservation of electricity as a wave of triple-digit heat strained the state's power grid.

The California Independent System Operator issued a flex alert Tuesday for 2 p.m. to 9 p.m., the period when air conditioners are typically at peak use and consumers should avoid running major appliances.

Energy demand for the day was forecast to exceed 48,000 megawatts, which would be the highest demand on the grid so far this year.

The excessive heat warning is expected to stay in place until 10 p.m. Saturday.