Residents and county officials in the Solimar Fire and Springs Fire burn areas filled sandbags, cleared drains and installed concrete barriers to protects their homes and county roads near the barren hillside.

Two southbound lanes on the freeway temporarily closed as Caltrans crews, knee-deep in mud, worked to clear drains and clean up the overflow of debris left from the first of three storms.

In downtown Ventura, city leaders were concerned about how future El Nino storms will affect the burn areas.

"We have other issues like La Conchita," said James Monahan, a city councilman. "We have another situation on the west side, a similar situation, which if we get enough rain, could jeopardize several homes. We're very concerned about this weather."

Click here for the latest updates on your 7-day forecast.

In 2013, the Springs Fire swept through the area, burning up vegetation and clearing the way for mudslides. Thirteen homes in Camarillo Springs were red-tagged and deemed total losses following a storm in December 2014. A hill behind the homes collapsed, sending mud, rocks and tree limbs into their yards. Numerous homes were still red-tagged and boarded up Tuesday, over a year after the storm hit.

Last month, a blaze in the Solimar Beach area of Ventura County burned about 1,200 acres of land near the Pacific Coast Highway, also known as Highway 101.

At 9:30 a.m., the National Weather Service issued a flash-flood warning for the Solimar Fire burn area. Doppler radar and surface rain gauges indicated heavy rain across the warned area and flash flooding with mud and debris was reported across Highway 101. The flash-flood warning expired at 12:30 p.m. 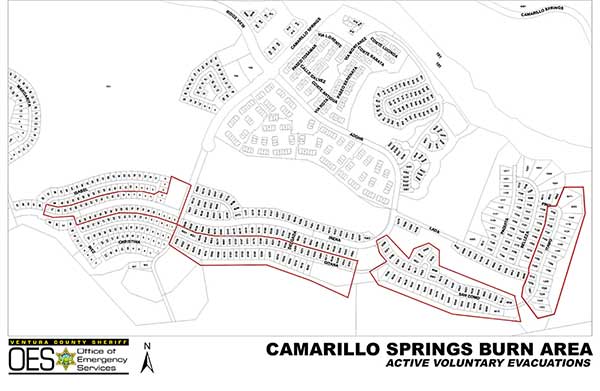 Voluntary evacuations have been issued for Camarillo Springs residents outlined in red in this map provided by the Ventura County Sheriff's Office of Emergency Services.

The voluntary evacuation order for Camarillo Springs, which went into effect at 6 a.m., expired at 6 p.m. The area saw the heaviest rainfall between 7 a.m. and noon Tuesday.

"Camarillo Springs has a heart and a soul. It's a wonderful community, and we're going to be OK," one evacuee told Eyewitness News.