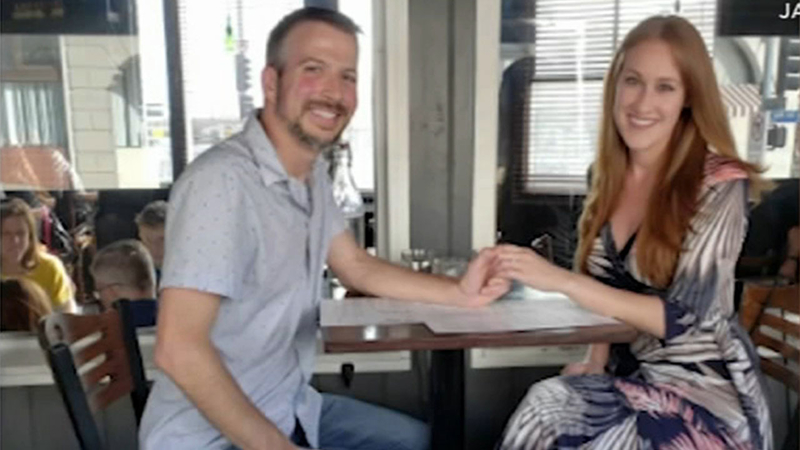 HERMOSA BEACH, Calif. (KABC) -- The COVID-19 pandemic has made it difficult to hold almost any kind of large event. For couples organizing their wedding it has made a complicated planning process even more difficult.

Jacqueline Casas of Hermosa Beach is living that nightmare herself.

"When the pandemic started, we sat tight and said let's just see what happens," said Casas, who was scheduled to get married to her fiancé in May at Villa de Amore in Temecula.

"They said, this is all up in the air. Everybody is going to be having a hard time but we're here with you."

Casas was planning a wedding for about 50 people on May 11, and had already paid nearly $15,000 to the venue when the pandemic hit America. Large gatherings were prohibited in March, and Casas said she was notified by email about her options.

"The venue told us for those of you who have weddings in May, we're available for you to postpone if you want," said Casas, who said Villa de Amore offered her several possible dates to which they could postpone their wedding.

"They told us we could otherwise kind of sit tight and wait it out," said Casas.

The couple did have a force majeure clause in their original contract that allowed them a full refund plus an additional $500 if the venue had to cancel their wedding because of "war, riots, insurrection, civil commotion, fire, flood, government agency, accident, storm or act of God which prohibits the event."

But when Casas and her fiancé decided to postpone their event to Sept. 21, and were about to sign a new contract, they noticed the force majeure language had been removed from the paperwork.

"I was surprised," said Casas, who said after an email and phone call to the venue they reluctantly agreed to have the force majeure clause reinserted into the new contract. "We got the language put back in, and we signed the contract for Sept. 21."

A couple of months went by, and although many wineries reopened in the Temecula area for outdoor service, wedding receptions are still prohibited. Consequently, it made the contents of an email she received from the venue on July 1 even more confusing.

"They sent an email... saying they had hosted a wedding and have a few more coming up," said Casas, who said she and her fiancé were confused about how the venue could be hosting wedding receptions given state and local orders prohibiting them.

"We were a little worried about that and confused. Because we thought things were shut down," wondered Casas. "Maybe they're open somehow on religious ceremonies or something. We weren't sure."

Casas said she followed up with an email to the venue on July 15, asking the venue about their plans to host their wedding in a safe manner; whether hand sanitizer would be made available; whether bride and groom's rooms were being cleaned ahead of time. The venue's response was even more confusing, especially given their prior email two weeks prior.

"They responded and said on July 2 the state and county again changed their position, and we're no longer holding the receptions," said Casas. "And we were just confused. They didn't reach out to us; we found out two weeks later because we reached out to them."

Casas said she later determined that Riverside County had a temporary restraining order granted against Villa de Amore in mid-July. A county spokesperson said a restraining order is still in place, because the venue had been holding wedding receptions against state orders.

The situation came to a head four weeks prior to their planned wedding date, when she emailed the venue about the status of their event. She said the venue informed them that they were not holding receptions, and the couple had three options.

"They told us we can continue to sit and wait, pick a new date, or do a micro wedding."

According to the email, the venue explained that a "micro wedding" is an outdoor ceremony with up to 150 guests. The venue said they could perform the ceremony for $10,000, and it would include flowers, photography, ceremony music, a coordinator and allow guests four hours on the property.

Casas was immediately concerned with whether such a process was even legal given current restrictions.

"To me it doesn't feel like the intent of the state or local rules," said Casas.

A spokesperson for Riverside County public health told Eyewitness News that the concept of an outdoor venue holding such a service is permissible, as long as the venue requires patrons to socially distance, and wear masks when such distancing isn't possible.

Casas said they've asked for a full refund, as per the force majeure provision in their contract.

"We want a ceremony and a reception; that's the agreement that we signed," said Casas. "So essentially we're taking that as notice that they're not able to host the event."

Casas said to this point, the venue has not offered them a full refund.

"I don't feel like they're taking it seriously from the perspective of focusing on health and safety," said Casas. "It seems like they're focusing on just having some type of event, so we can't get our money back."

An event spokesperson named David responded to questions by Eyewitness News in writing:

"Currently all wedding facilities in California have had the ability to hold receptions (dinner and dancing) suspended by the state due to COVID-19. We have offered all our clients an equitable postponement date later this year or next to have their event if state restrictions are in place on the date of their event. There is no penalty for moving their date, and all monies paid to date are moved to the new event. We have also offered clients the option of holding a micro wedding, which is currently allowed in Riverside County.

A micro wedding would be for a ceremony and use of the property for photos, not a reception. Being that our facility is outdoors, there is not limitations put on the size of the group as long as you can keep them distanced and abide by CDC guidelines. A new contract for this service would be entered into, and would supersede the previous agreement. The difference in cost between what they have currently paid and the new service would be refunded to them the day of their event."

When we specifically asked the venue whether Casas would be eligible for a full refund, they responded with this statement:

"If the couple was not able to have their wedding as planned on 9/21 and they chose to not move forward with the options provided, we would then submit their claim to our insurance company for review."

Casas and her fiancé say they are now in a holding pattern. They say Riverside County has not shown any indication that wedding receptions will be allowed by their planned date of Sept. 21. Yet they're still under contract and have paid the venue more than $14,500.