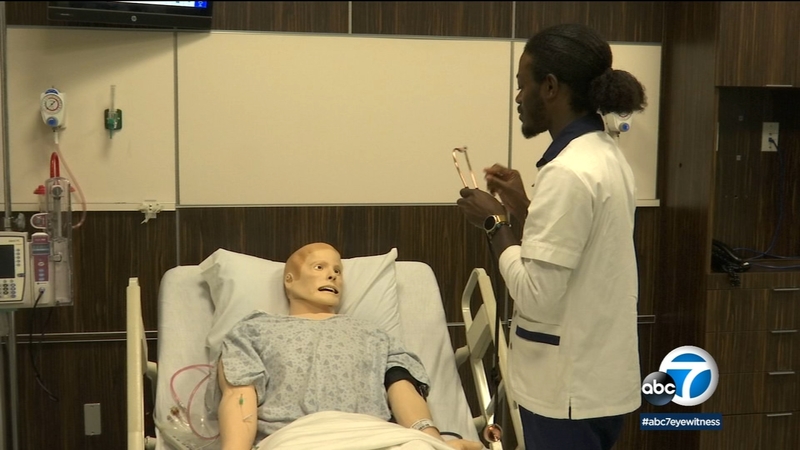 NORTH HOLLYWOOD, LOS ANGELES (KABC) -- At West Coast University's simulation lab in North Hollywood, nursing students train in classrooms that feels like they're in a hospital.

They're faced with everything from a patient in labor to treating children. West Coast University has two other campuses in Anaheim and Ontario, and per year, the school adds roughly 1,000 nurses to the workforce, but it's not enough.

"Roughly 55% of our nurses are 55 or older so they're about to retire in the next decade. It's short now, it's about to get a lot worse," said Scott Casanover, the Vice President of Government Relations for West Coast University.

"Not only are there going to be positions open now for graduates, but they're also going to need different levels of care and some of that is going to be in the acute care setting where this is a high demand for nurses. It impacts health care and it impacts the access to health care for our communities," said nursing student Karolina Gasamanian.

According to registerednursing.org, by 2030, the demand for registered nurses in California will be 388,000. But, the number of nurses is projected at 343,000. Although West Coast University has expanded to meet the shortage, the nursing school says there's only so much they can do.

"Unfortunately, our current nursing board in the state is putting a cap on enrollments across all nursing schools and they're suppressing students' access to education. That's troubling. Using the board of nursing's own data, 23,000 nursing students that would otherwise be eligible to attend school, they're qualified, they're turned away because there's not enough room," said Casanover.

In an effort to address the lack of nursing education in the state, West Coast University along with other schools traveled to Sacramento last month. They were lobbying for an audit of the California Board of Registered Nursing.