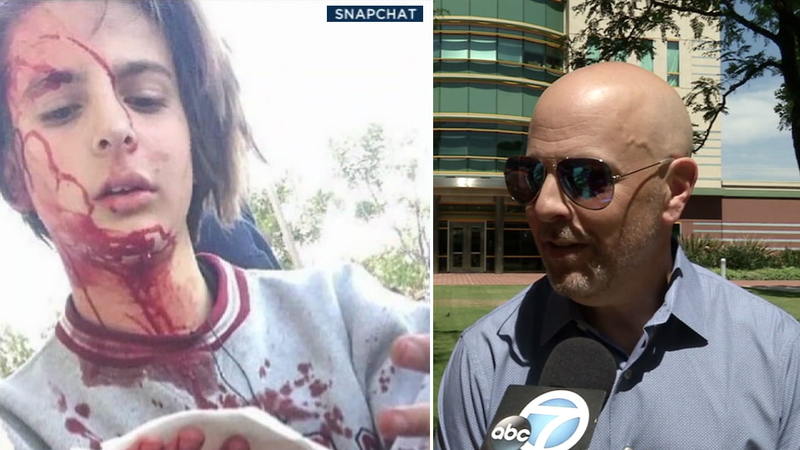 WEST HILLS, LOS ANGELES (KABC) -- The father of a West Hills teen who was filmed being beaten on Snapchat filed a lawsuit Tuesday.

Ed Peisner demanded justice and filed a civil lawsuit against three teenagers, the parent company of Wendy's restaurant and the managing company in charge of the Platt Village Shopping Center.

That shopping center is where his son Jordan was brutally attacked in December. It happened in front of the Wendy's in the plaza and was captured on cellphone video and posted to Snapchat.

"The criminal system, justice system, didn't do anything. Didn't hold anybody accountable," Peisner said. "(Jordan) suffers from some emotional issues. He has permanent hearing loss in his ear."

The lawsuit claims a female teenager persuaded another teen to sucker punch Peisner's 14-year-old son by promising oral sex and cash in return. They then agreed that a third teen would record the incident and upload it to social media.

"They took 90 percent of my life away from me," Jordan said.

Jordan suffered a skull fracture, ruptured ear drum and bleeding on the brain. He is now home schooled and his father said because of those injuries, Jordan will never again play any contact sport.

The lawsuit also alleges those in charge of the Wendy's restaurant and shopping center knew about the problems on their property, but failed to keep everyone safe.

"This is unfortunately a location that's got a long history of unruly, rowdy behavior, of criminal conduct, of law breaking, of business owners who don't seem to do anything about it and a property management company that's known about it and doesn't seem to care," the Peisner family attorney Paul Philips said.

The family did not disclose how much compensation they will be seeking, but Ed Peisner said he is supporting a proposed bill named after his son that would criminalize attacks motivated by social media.

"Jordan's Law will hold accountable the party that videotapes a crime that they're aware of," he said.

The teen suspect was arrested and appeared in court last month. The second teen involved was found not guilty and the third teen, who shot the video, was never charged.