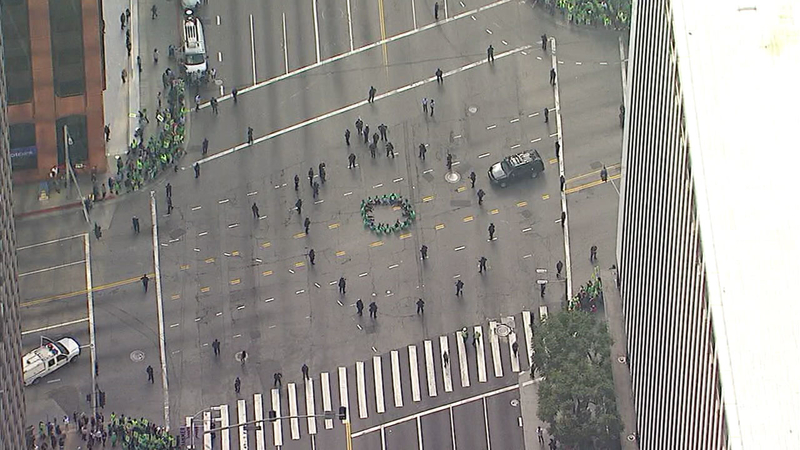 The large protest was scheduled to be done on the 50th anniversary of the assassination of Dr. Martin Luther King Jr. It started around 2:30 p.m. and expected to end around 5 p.m.

Protesters wore green with AFSCME Local 3299 on the backs of the shirts. People also held signs that featured King's face and quotes.

Several of the protesters blocked the intersection of Federal Avenue and Wilshire Boulevard by creating a large circle and sitting down in the middle of the road. A few streets were blocked off to keep the protesters safe as law enforcement surrounded them.

Traffic was backed up for a few miles while the demonstrators continued to block traffic. At some point, authorities began detaining people who were sitting in the circle. The large group then began walking through the crosswalks.

They all met up and began marching down the street along the sidewalk.

The rally was set up after a recent study showed racial and gender gaps within the UC system, which is California's third largest employer.

Union representatives released an analysis of that data that showed a large gap between the system's highest paid and lowest paid workers, as well as a decline in African-American employment.

A spokesperson for the UC system issued a statement on the report and demonstration, saying the system is "committed to recognizing and nurturing talent, dedication, and achievement by supporting diversity and equal opportunity."

UC can confirm neither the accuracy of the figures nor the conclusions contained in AFSCME's report because we do not know how the union arrived at its information.

We take issues of fairness and equitable treatment seriously, have mechanisms in place to respond to these types of issues, and follow appropriate Equal Employment Opportunity policies. We encourage any employee who believes he or she is being treated unfairly to bring their concerns to the attention of the proper UC office so that they may be addressed quickly.