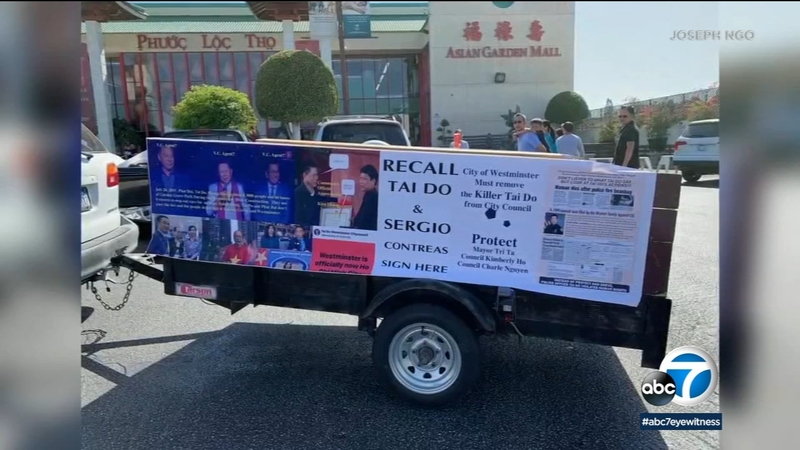 WESTMINSTER, Calif. (KABC) -- The city of Westminster is in turmoil as all five council members could face a recall election.

There are two groups of proponents. One called Westminster United took a big step in its efforts this week as the city clerk's office confirmed the group submitted three recall petitions, each with more than 11,000 signatures.

"It was a feat that some said could not be done and we did it," said Camilla Overbeek, a board member of Westminster United.

Signatures have gone from the clerk's office to the Orange County Registrar's office, paving the way for a potential recall election of Mayor Tri Ta and council members Kimberly Ho and Chi Charlie Nguyen.

"For a long time, the city of Westminster has been under unethical leadership by some council," said longtime resident Carlos Manzo.

"We don't accept leadership of nepotism, corruption, intimidation. These are things that don't belong in our city," said David Johnson, board member with Westminster United.

But former Assemblyman Van Tran, who is the lawyer for two of the three city leaders targeted in the recall, says those claims are false.

At the same time, another group is circulating its own petitions for the two remaining council members, Sergio Contreras and Tai Do.

But this group has no major funding compared to Westminster United, which received about a half million dollars of in-kind donations from Vietnamese billionaire Kieu Hoang.

"The ironic and tragic story about this is that he lives out of Los Angeles County. He works and lives in L.A. County and has no or little business in Westminster," said Tran.

Westminster United says Hoang gave to Mayor Ta in the past, but regrets it. Hoang now publicly backs Westminster United on his YouTube page, and even endorsed the recall efforts at a large event he hosted at the Microsoft Theater.

"Thinking that money can buy an election - that is a real problem and the voters, the residents of this city will reject that effort," Tran said.

But Westminster United says the other side uses that as a distraction from the real issue - all the reasons the recall efforts started in the first place.