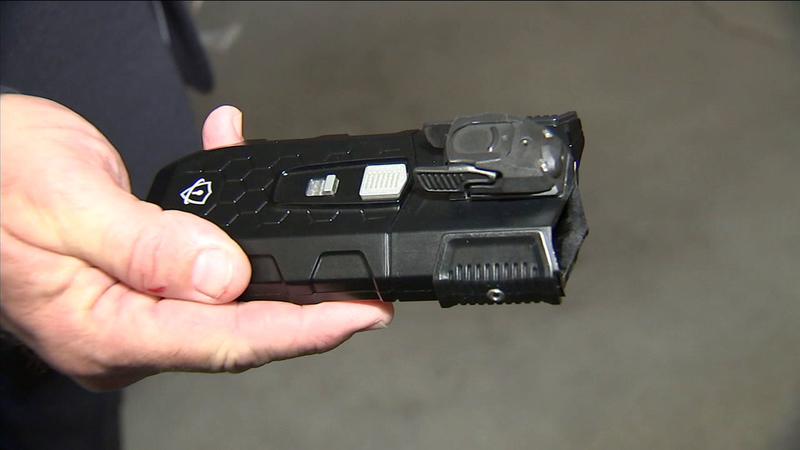 WESTMINSTER, Calif. (KABC) -- Westminster police will be the first department in Orange County to start using the "BolaWrap," a new handheld device that could result in fewer officer-involved shootings.

The "BolaWrap" operates as a restraint device that fires an eight-foot bola-style Kevlar tether at lightning speed to entangle a noncompliant suspect.

"It comes out of the tool at 654 feet a second, so it's pretty fast," Mike Rothans, a "BolaWrap" official, said.

The device can subdue a suspect from 25 feet away.

"It wraps snug, and basically it's because of the amount of inertia when it's coming out of the tool," Rothans said.

"BolaWrap" officials said it's already being tested by the Los Angeles Police Department, along with multiple law enforcement agencies nationwide.

The Westminster Police Department becomes the first law enforcement agency in Orange County to test it as well.

"What about those families of a mentally ill person, that officers have a tool to maybe mitigate a deadly force incident," Westminster Police Department Chief Ralph Ornelas said.

In some cases a noncompliant suspect under the influence of narcotics can withstand multiple rounds of less than lethal bean bangs, rubber bullets and even Tasers.

However, "BolaWrap" is designed to wrap up and contain a suspect, like a cowboy lassoing a calf at a rodeo.

"The more humane way, as opposed to trying to cause pain to gain compliance, it's more about restraint," Rothans said.

The device spits out the thin, but strong tether at lightning speed, and it contains hooks at the end of each side latching on tight.

"This restrains you," Rothans said. "You can't run at me, you can't run away from me, so you are not going to hurt me or hurt yourself."

"BolaWrap" is only available to law enforcement.