Large whale washes up on beach in Shirley, Long Island 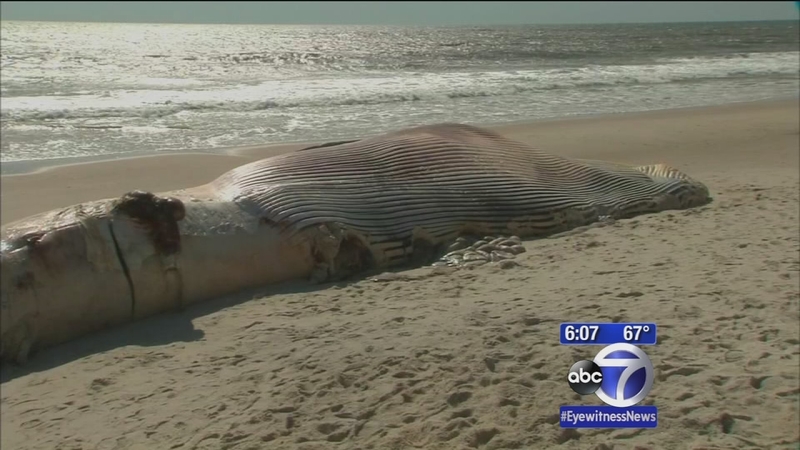 Scientists with the Riverhead Foundation for Marine Research and Preservation believe it is a male finback whale, about 58 feet long.

"I guess it was his time in life, you know. It's big. It's wild. It's something I probably won't see again. You never know," said Gary Sulz, a Holbrook resident.

Those with the Riverhead Foundation spent the day examining the carcass at Smith Point Park. They believe it may be the same whale that was spotted floating off Jones Beach a few days ago.

"The internal examination will reveal hopefully any kind of evidence to rule out ship strike, any kind of internal injuries -- broken bones, anything like that," said Kimberly Durham, Rescue Program Director at the Riverhead Foundation.

Durham says the whale has been dead for some time.

Randy Ward says he was the first to spot the whale when he went for his walk on the beach at 6:30 a.m. Thursday and alerted park police.

"It was the first time I ever saw this. I've been around a lot but I've never seen something like this, no. It's very interesting," said Ward, a Ridge resident.

A large sea turtle washed up in the same area earlier this week. However, it does not appear to be related to the whale's death.

For people being this close to what once was such a majestic creature is awe inspiring.

"It's interesting to think about how many more of them are in the water right now as we speak," said Paulina Drew, a Mastic Beach resident.

The Riverhead Foundation is working with Suffolk County Parks officials to determine how to dispose of the whale. There is no word yet on the cause of death.

The foundation says finback whales frequently have been spotted off eastern Long Island in recent months.