What happens next in the Breonna Taylor case 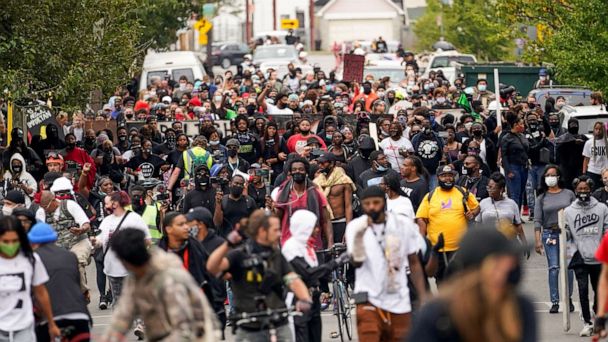 Federal charges in the shooting death of Breonna Taylor are still possible even though a Kentucky grand jury indicted only one Louisville officer and no murder charges were issued in connection with the case.

The FBI is still investigating "all aspects," a spokesperson for the law enforcement agency told ABC News in a statement.


"As we have indicated," the FBI said, "our investigation is focusing on all aspects of Breonna Taylor's death. Once our investigation is concluded, we will provide the collected facts to the Department of Justice Civil Rights Division to determine if federal criminal charges are warranted."

Former Louisville Police officer Brett Hankison was indicted Wednesday on three counts of first-degree wanton endangerment for allegedly endangering Taylor's neighbors when he fired into the apartment complex. The charge carries a definition of extreme indifference to human life.

Hankison faces a potential 15-year prison sentence -- five years for each charge -- and bond was set at $15,000. He has not yet entered a plea.

Taylor, 26, died March 13 after three undercover officers, Myles Cosgrove, Brett Hankison and Sgt. Jonathan Mattingly, executed a no-knock warrant at the apartment where Taylor and her boyfriend, Kenneth Walker were living in Louisville.


The officers initially were placed on administrative reassignment pending the results of an investigation.

Hankison was later fired for violating police department procedure when he fired 10 rounds into Taylor's apartment while executing the warrant, according to his termination letter, which had been shared with local reporters. He is appealing his termination.

The charges against him stem from the errant bullets that entered a neighboring apartment occupied by a child, a man and a pregnant woman, Kentucky Attorney General Daniel Cameron said at a news conference following the grand jury's announcement.

Cosgrove fired 16 times into Taylor's apartment and Mattingly fired six shots after they were fired on by Walker, but the investigation concluded that they were justified in their use of force, Cameron said.

Taylor's family reached a $12 million settlement with the City of Louisville on the wrongful death lawsuit Taylor's mother filed in April.


Walker allegedly opened fire after the home was entered by the officers who shot and killed Taylor. Walker announced earlier this month that he's suing the city of Louisville, its police department and others, for immunity against his actions that night under Kentucky's "stand your ground" law.

An attorney for Hankison did not immediately respond to ABC News' request for comment.