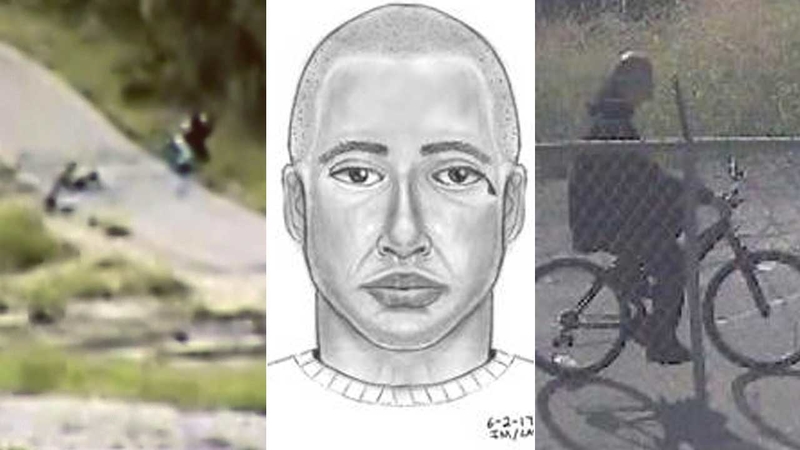 SOUTH EL MONTE, Calif. (KABC) -- Detectives released surveillance video and a sketch in hopes of catching a sexual predator who assaulted a woman who was jogging in South El Monte.

WATCH: The latest details on the search for the suspect on ABC7 at 3 p.m.

The frightening incident occurred in the early evening hours of June 1 in the Whittier Narrows Recreation Area, which is regarded as one of the safest parks in Los Angeles County.

In the video, the man is seen getting off his bike and starting a conversation with the woman. He then drops the bike on the ground, grabs the woman and forces her into the bushes.

Los Angeles County sheriff's officials said the woman was with a group of joggers, but she lagged behind.

She was dragged down a hillside, where she was sexually assaulted. The horrific ordeal lasted around 10 minutes, then the suspect rode away on his bike, detectives said.

The victim was able to fight him off, escape and call for help.

"It's hard to imagine that mindset, but all we can think of is that the guy is just a predator. He's a dangerous man, a dangerous individual, and that's why we need to identify him as soon as possible, because he needs to be locked up," said one investigator on the case.

The suspect is described as an adult Hispanic male in his 20s, approximately 5 feet 9 inches tall, weighing around 175 pounds with a clean-shaven face. He speaks Spanish and was last seen wearing a black hooded sweatshirt and black sweatpants, officials said.

The sheriff's department released a composite sketch that shows a teardrop tattoo under his left eye.

The Los Angeles County Board of Supervisors approved a $10,000 reward in the case in exchange for information leading to the apprehension and conviction of the suspect.