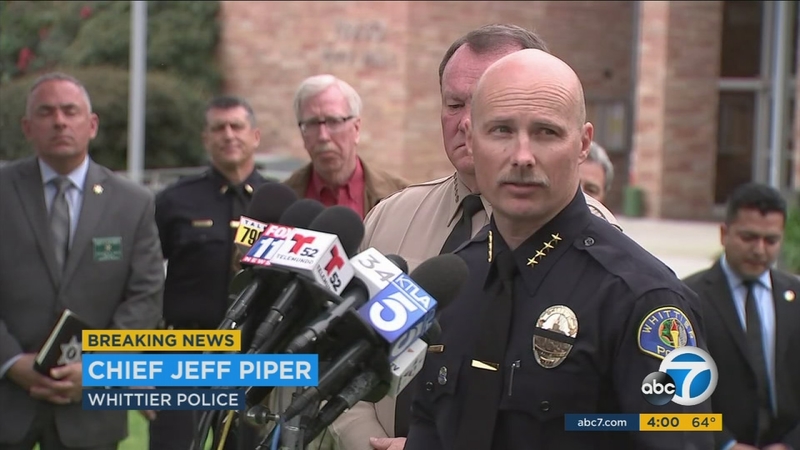 SANTA ANA, Calif. (KABC) -- The Whittier police officer who was killed in the line of duty during a shootout on Monday was identified as Keith Boyer, a member of the force since 1989.

The officer's body was escorted via motorcade from UC Irvine Medical Center in Orange to the Orange County Coroner's Office in Santa Ana. A long line of law enforcement officials saluted the officer's flag-draped body as it was wheeled into the coroner's office.

"He was a personal friend of mine for over 25 years, and I can honestly say on behalf of all the officers, he was the best of the best," said Whittier Police Chief Jeff Piper.

Piper said Boyer was hired as a dispatcher-jailer, and then a reserve officer. He became a full-time police officer in 1990.

Boyer was killed and a second officer was wounded in a shooting while they were responding to a report of a traffic accident near Mar Vista Street and Colima Road shortly before 8:30 a.m. Monday.

"He was a fantastic officer ... Over the last several years, Officer Boyer's been the go-to officer in the field as a beat officer, respected for his many years of experience, and young officers looked to him for advice and guidance," the chief said. "Keith was very humble. He was always smiling, positive, energetic, diligent."

Boyer was in a band playing drums, Piper said, and years ago, the two played in a band together for nonprofits. As the chief spoke about Boyer's impact on the police department, he was overcome with emotion.

"All of us have been grieving since 10 o'clock this morning, and I didn't think I had any tears left," Piper said. "But we're going to get through it. This makes us stronger. But everybody needs to know what these officers are dealing with on a daily basis."

The Whittier Police Department has about 125 sworn officers who police Whittier and Santa Fe Springs in southeastern Los Angeles County.