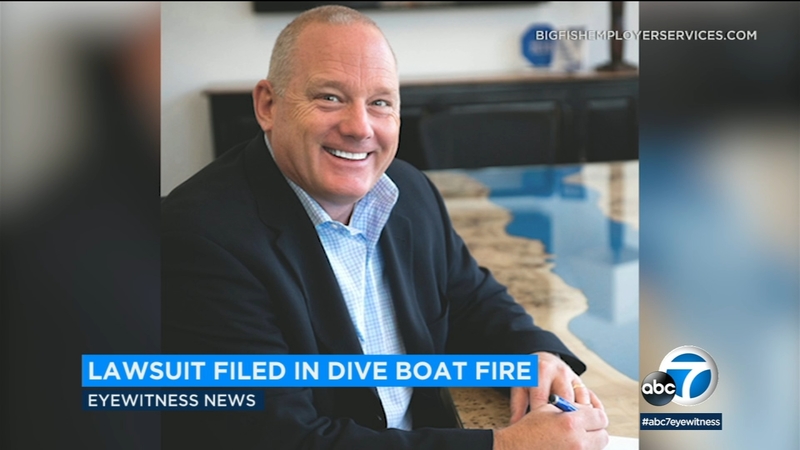 LOS ANGELES (KABC) -- The widow of a man who died in a fiery dive boat disaster that killed 34 people off the Ventura County coast is suing the vessel's owners.

The lawsuit against Santa Barbara-based Truth Aquatics is the first from a relative of those who died on the boat.

The lawsuit is a counterclaim to a lawsuit filed pre-emptively by owners of the boat, called the Conception.

Truth Aquatics preemptively filed a federal lawsuit under a pre-Civil War maritime law that shields boat owners from monetary damages in a disaster at sea.

Authorities are conducting criminal and safety investigations into the fatal fire.

The blaze's cause has not been determined.

Lawyers for the boat company did not immediately respond to emails seeking comment on the lawsuit.

We're learning new details about the people who perished when the diving ship Conception burst into flames while anchored off the Santa Barbara coast.

The Conception caught fire on Labor Day, killing 33 passengers and one crew member. Five crew members were able to escape the flames and survive.

Investigators say all six crew members were asleep when the fire started. Coast Guard regulations require a crew member to be on watch.

Federal investigators have not been able to determine the cause, but Truth Aquatics has come under intense scrutiny.

All of those who died were in a bunkroom below the main deck. Officials have said the 33 passengers and one crew member had no ability to escape the flames. The captain and four crew members above survived.

Truth Aquatics has suspended operations of its other boats while the investigation proceeds.