The air was so thick because of the smoke and ash, the hills above Monrovia could barely be seen as wildfires raged, causing poor air quality in Southern California.
KABC
By John Gregory 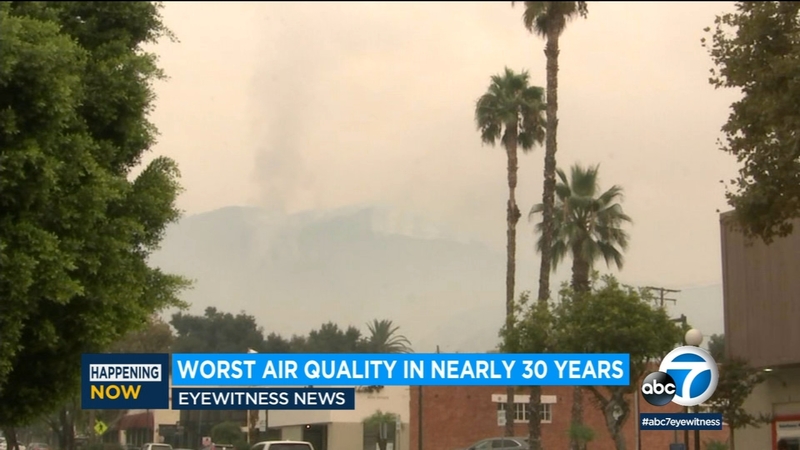 MONROVIA, Calif. (KABC) -- A dense smoke layer from dozens of raging wildfires darkened the skies and fouled the air in the Southland on Thursday and was expected to hover in the region at least through the weekend.

Eerie orange and red skies across California -- as well as Oregon and Washington -- had mainly turned gray thanks to stronger winds coming in from the Pacific Ocean that helped to disperse thick smoke that acted as a filter scattering blue light and only allowed yellow, orange and red light to reach the ground.

But as the wind scattered the smoke and a layer of air blocking it from reaching the ground started dissipating Thursday, smoke particles began mixing with ground-level air worsening air quality in much of California and parts of Oregon where wildfires are raging.

The air was so thick because of the smoke and ash, the hills above Monrovia could barely be seen as the devastating Bobcat and El Dorado fires continued to cause poor air quality across the region.

Amanda Mandarich of Monrovia told ABC7 it's "a little rough. Just with the smoke and all that. Obviously it's hard to breathe. Just kinda going through the day, going through my lifestyle with walking and working out and everything like that."

The county has closed the following parks through the weekend because of poor air quality:

The South Coast AQMD issued a smoke advisory for Thursday impacting most of Southern California.

A respite from the bad air and a chance to see blue skies could come by the middle of next week when the forecast shows stronger winds and light rain, Anderson said.

Staying indoors wasn't an option for everyone, especially those who work outside in the hot weather and are dealing with the bad air.

People were advised to avoid outdoor, strenuous activity, stay indoors and turn on the air conditioning and keep windows and doors closed.

"You know at this point the safest thing is for people to stay indoors. Have their air conditioning on and make sure that they're drinking plenty of water and avoid getting dehydrated," said Dr. Thomas Yadegar, a pulmonologist.

"This poor air quality is not healthy for anyone, especially people with allergies. People with underlying heart and lung disease. As well as the young children, women who are pregnant, as well as our senior citizens."

Dr. Zab Mosenifar, medical director of the Women's Guild Lung Institute at the Los Angeles hospital, said he has detected a "noticeable increase in the last few days'' of patients complaining of coughing, shortness of breath and chest tightness.

He said the impact of exposure to ash and smoke can be "immediate'' for those with pre-existing conditions such as asthma and chronic obstructive pulmonary disease, noting that people with asthma should not even go out for five minutes when the air quality is this bad. It is also of concern to the elderly, pregnant women and children, Mosenifar said.

People who are in good health "may not feel it right at that moment,'' but may face long-term impacts with repeated exposure, the doctor said.

Those who live even as far away as 25 to 40 miles away from a wildfire can be affected by smaller particles that float through the area and go inside the lungs without being noticed, he said.

Below is a map that shows air quality levels for SoCal as well as statewide.

The Bobcat Fire burning in the Angeles National Forest has exploded in size to 23,890 acres as several San Gabriel Valley foothill communities remain under an evacuation warning.