Woman was nearly sucked out of Southwest plane after engine failure, witnesses say 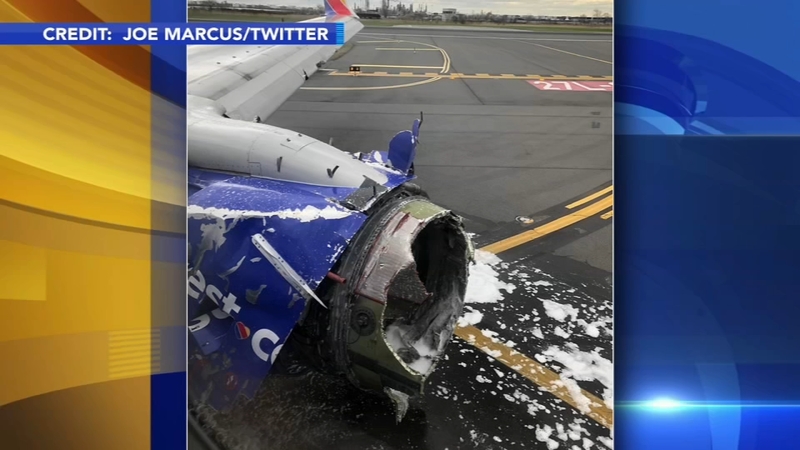 What happened on Southwest Flight 1380?

PHILADELPHIA -- Multiple witnesses say a woman was "nearly sucked out of the plane" after a Southwest Airlines jet had an apparent midair engine failure on Tuesday, forcing an emergency landing at Philadelphia International Airport.

Authorities said the jet blew an engine at about 30,000 feet and got hit by shrapnel that smashed a window and damaged the fuselage, killing a passenger and injuring seven others. It was the first passenger fatality in an accident involving a U.S. airline since 2009, Sumwalt said.

A crew member on the plane reported to air traffic controllers that a piece of the plane was missing and "someone went out." In the audio recording of the exchange, the crew member says the plane needed to slow down.

It has not yet been confirmed that the person being referenced by the crew member is the individual who was killed.

The woman who died was identified as Jennifer Riordan, according to ABC News. Her former employer, the University of New Mexico Health Sciences Center released a statement upon the news of her death.

"Jennifer was an amazing community leader, team member, wife and mother. Her passion for our community, our students and our future was unwavering. We are committed to carrying on her work to ensure quality education and career opportunities to New Mexico's youth. Our thoughts and prayers remain with her family during this difficult time. She will be forever missed by her Lobo family," it said in part.

Aviation attorney Arthur Wolk told KABC-TV's sister station that it appears to be a case of "uncontained engine failure." The big front compressor fans inside the engine appear to have flown apart during the flight.

Matt Tranchin was on his flight home from New York to his 8-month pregnant wife in Dallas when he saw an explosion ahead of him.

"Right around the time there was a huge explosion and glass shattering three rows ahead of me, that was about the moment that I realized this was not going to be a normal flight," Tranchin said.

Chaos and confusion was felt throughout the plane, Tranchin said, followed by panic.

He believes an engine exploded and a shard shattered a window, injuring one of the passengers.

"Flight attendants rushed up. There was momentary chaos. Everyone kind of descended on where this hole was. As passengers we weren't sure if they were trying to cover up the hole, but the plane smelled like smoke. There was ash coming through the ventilation system. We started dropping," Tranchin said.

As for reports from passengers hearing an explosion, Wolk thinks that was the explosive decompression of the pressurized plane through the broken window that reportedly injured a passenger who was pulled into that small opening.

"All the air in this cabin, as long as it is, wants to go through that little hole at one time. That's what it is that sucks the passenger into the hole, to try to plug the hole. So that passenger takes the place of the window, unless the passenger gets sucked completely out," he said.