The WNBA honored the three SoCal teens who died in the January helicopter crash that also killed Kobe Bryant by naming them honorary selections in Friday's draft.
KABC
By ABC7.com staff 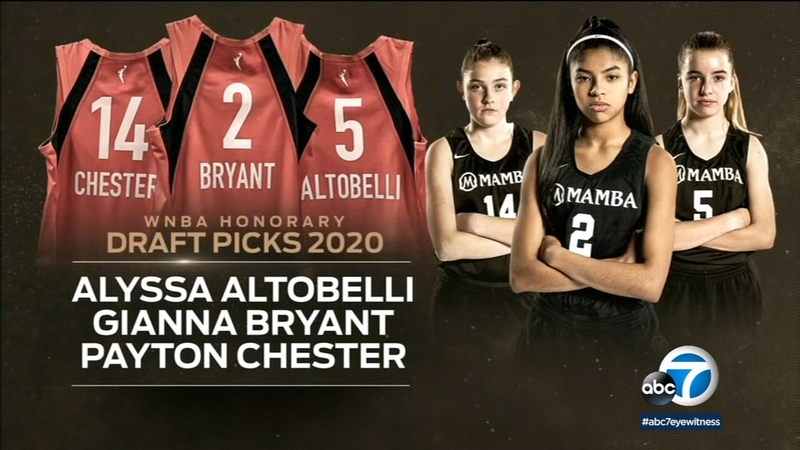 The WNBA honored the three Southern California teens who died in the January helicopter crash that also killed Kobe Bryant by naming them honorary selections in Friday's draft.

The league paid tribute to Gianna Bryant, Alyssa Altobelli and Payton Chester prior to the draft, showing jerseys with each of their names. The league also showed a video paying tribute to the three girls with messages from their families.

All three were basketball players associated with Kobe Bryant's Mamba Sports Academy and the helicopter crashed Jan. 26 while bringing them to a game.

"Thank you so much for honoring my Gigi and selecting her to be an honorary draft pick this year," Vanessa Bryant said. "It would have been a dream come true for her. She worked tirelessly every single day. She wanted to be one of the greatest athletes of all time, just like her daddy."

The WNBA pays tribute to the lives of Alyssa Altobelli, Gianna Bryant and Payton Chester by selecting them as honorary draftees in the #WNBADraft 2020. pic.twitter.com/AqpZnc4xfo

The league also announced that it would have a Kobe & Gigi Bryant WNBA Advocacy Award. It will recognize an individual or group who has made significant contributions to the visibility, perception and advancement of women's and girls' basketball at all levels.

"Kobe was an incredible champion of women's basketball and Gianna shared his passion and dedication to our game," Commissioner Cathy Engelbert said. "The Kobe & Gigi Bryant WNBA Advocacy Award will honor their legacy and reflect Kobe's commitment to mentoring the next generation of players, promoting the game and giving back to the community."


Once the draft itself was held, Oregon star Sabrina Ionescu was the No. 1 pick, as expected. When she'll play for the New York Liberty is unclear.

With sports on hold because of the coronavirus pandemic, it was a draft Friday night like no other with players in their own homes instead of a central location, Commissioner Cathy Engelbert announced selections from her home in New Jersey, holding up the jersey of the player being chosen.

While the draft was held Friday, its still unclear when the league will actually start its season. Engelbert reinforced on a conference call earlier in the day that there was no timetable to when the season will begin. She said there were a variety of scenarios in play, but the most important factor was the health of everyone. Training camp was supposed to begin next weekend with the regular season opener originally scheduled for May 15.
Ionescu, who hails from Walnut Creek, Calif., set the NCAA record for triple-doubles and was the first college player to have over 2,000 points, 1,000 rebounds and 1,000 assists in her career. Ionescu was one of three first round picks for New York, which also had Nos. 9 and 12.

Ionescu also spoke at Kobe Bryant's funeral and said she was touched by the league's tribute to the three girls.

"I think it was a very beautiful thing that the WNBA did to be able to draft those three girls," Ionescu said. "They deserved it. I know they're looking down and smiling and really excited."