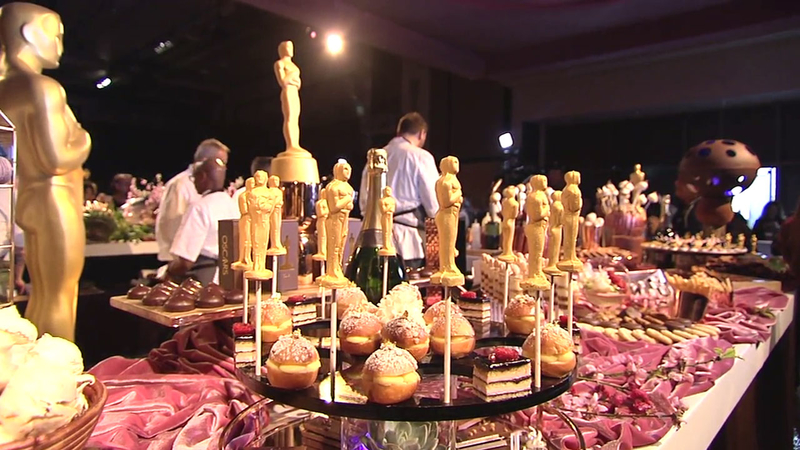 LOS ANGELES -- Every year when the long Oscar telecast is over, invitees quickly make their way to the Governors Ball - the official after party where 1,600 guests are more than ready to eat, drink and be merry.

Governors Ball producer Cheryl Cecchetto is especially happy with the art for this year's ball. An idea that came from the creative mind of Ball chairman Jeffrey Kurland.

"He has commissioned nine costume illustrators from the film world who he worked with and took the inspiration from brown derby and from Sardi's to produce 170 original caricatures, which are representing the film industry. Not only today but since the very first Oscars," she said.

Art is the theme of this year's Ball, and you can always expect elegance there. As far as the flowers go, simplicity is key.

"We're not mixing any flowers," floral designer Mark Held said. "We're not creating arrangements, per se. It's gardenias in a bowl floating. It's calla lilies in a vase. It's ranunculus from Japan in a container. So clean, simple, appreciate the flower for its own beauty."

Don't read anything into this year's choice of all-white flowers.

"Flowers are beautiful," Held said. "They're not political."

Celebrity Chef Wolfgang Puck shares what's on the menu for the 2016 Governors Ball.

So, what's on the menu this year? Guests have the opportunity to chow down on more than 60 savory selections - thanks, once again, to Chef Wolfgang Puck and his staff. After 22 consecutive years of this gig, Wolfgang knows his audience.

"Everybody is so hungry and a lot of people want comfort food," Puck said. "People cannot get enough of our chicken pot pie with truffles, of our macaroni and cheese and, naturally, the chinois lobster."

"I just started an online cooking school," he said. "So you go to wolfgangpuckcookingschool.com. You can do most of the recipes in your kitchen now. That's something totally new."

Don't think for a minute that these Hollywood types skip dessert. There will be plenty of chocolate and lots of traditional desserts like cheesecake pops, cookies and brownies. A "hot" new item added to the plate for 2016: doughnuts.

"Before we serve them, once they are cooked we put a little bit of raspberry liquor on them," Puck said. "And then we flame them!"