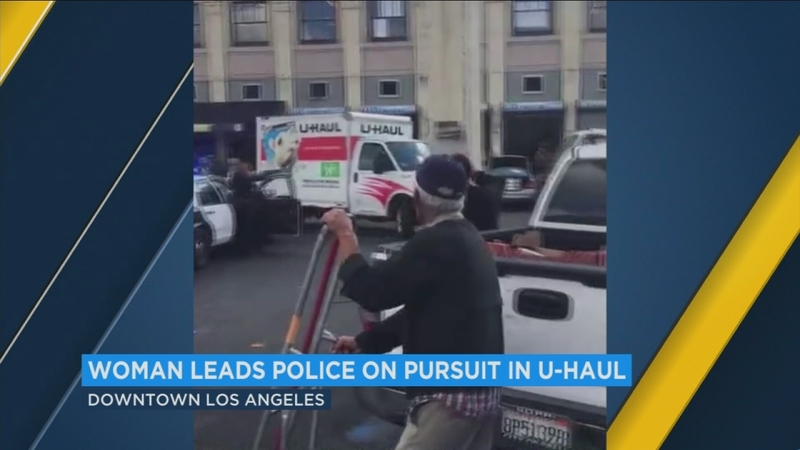 Woman arrested after chase in DTLA with stolen U-Haul

DOWNTOWN LOS ANGELES (KABC) -- Authorities arrested a woman in a busy downtown fruit mart after she led them on a dangerous chase in a U-Haul truck.

The chase started at about 10 a.m. near 61st Street and Broadway after a report of a stolen U-Haul truck. The pursuit lasted about 20 minutes and ended at a crowded produce market near 8th Street and Central Avenue.

The suspect tried to escape from officers who appeared to have the truck cornered at the market. As she turned the U-Haul around, she crashed into a few cars and damaged at least three patrol vehicles.

But even as she got away, she stopped the vehicle near the mart and ran into a business. Police quickly caught up to her and took her into custody as she struggled to cooperate.

"This is a very congested area. There's a lot of moving parts in there, there's a lot of produce being moved around, a lot of employees, workers and heavy trucks, so it's a very tight and confined space," said LAPD Lt. Chris Ramirez.

Officers eventually covered her with a spit mask, and she was taken to a hospital to be evaluated.

The suspect, who was not identified, will be charged with assault with a deadly weapon, authorities said.