KABC
By Miriam Hernandez
CENTURY CITY, LOS ANGELES (KABC) -- A confrontation that ended with an impulsive moment ignited an international social media frenzy and sent its central figure into hiding.

"I have been told not to go home because it is too dangerous. Everybody in my area thinks I am a racist," Century City resident Rhonda Polon said.

Polon is seen on the video dousing Miguel Angel Sanchez with a cup of coffee. Sanchez, a repairman, posted that Polon acted out of racism and stopped him from getting to a unit in her condo complex because she does not like Mexicans.

Sanchez and his attorney also claim Polon later threatened his family in a Facebook message.

Now, Polon has a lawyer and said there is a different video that could show what happened before the argument took an ugly turn.

"This whole ordeal of racism came up which had nothing to do with her confrontation with these gentlemen," Polon's lawyer Ben Mironer said.

Mironer said security cameras will show that Polon acted as residents of the condo had been instructed to do - defend the private complex from unauthorized visitors. Recent thefts from the garage had them on alert.

Polon said neither Sanchez nor his co-worker arrived in a truck. She said Sanchez's partner was in a car, which tried to follow her into the garage. She said that the pair wore street clothes, not work clothes.

She said they could not give her the name of the person who had employed them or the unit they were going to. The workers displayed a garage door opener they said was given to them by the employer, but Polon said it didn't look like the typical opener used at the complex.

Polon said that Sanchez persisted in recording her though she had asked him to stop. She said that's when she tossed the coffee, which had gotten cold, because she felt trapped. She didn't have her cell phone to call the manager.

On Tuesday, she apologized for that.

"I am sorry. I am absolutely sorry for throwing anything," Polon said.

Sanchez post stirred hate calls and ended her job as a trainer. Polon responded by contacting Sanchez's wife through Facebook. It concluded with what the LAPD is now investigating as a potential criminal threat.

"I am just giving you a heads up because I know you have children and I wouldn't want you or them to be harmed," Polon said in the message.

She said she tried to explain further in a follow up message seconds later.

"So I wrote that, 'This is not a threat. I was just trying to get you to understand that your husband was in the wrong," she said.

That message would not transmit because Sanchez's wife blocked Polon.

"Talk to me. I have nothing to hide," she said.
Report a correction or typo
Related topics:
century citylos angeleslos angeles countyfightracismcaught on videolawsuitcellphonecoffee
Copyright © 2020 KABC-TV. All Rights Reserved.
RELATED 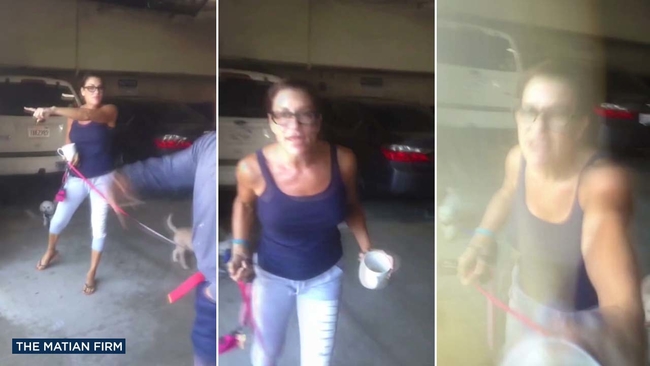