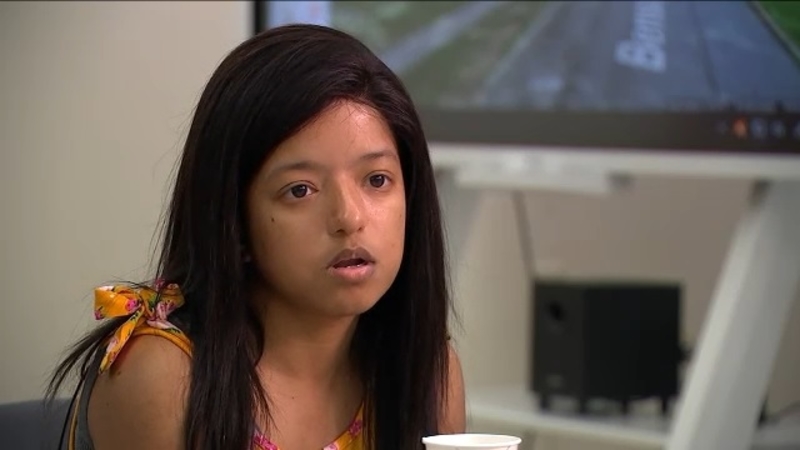 PASSAIC, N.J. -- A woman survived a terrifying close call after her car was swept away by flash flooding in New Jersey on Monday.

Nathalia Bruno, 24, was delivering food for DoorDash in Passaic when her car got sucked into an underground viaduct and carried toward the Passaic River.

"I didn't even know what I was going through," said Bruno.

The water rose near a ravine in Benson Park and there was no way to see the road when her car was swept up by the rising water.

Bruno got out of the car, but tried to stay with it when they both went under.

Witnesses say it happened so quickly there was no way to stop her from being sucked into the aqueduct.

"For me it was five minutes, all dark, trying to breathe, trying to put my feet on the ground, to pull me and get me some air," added Bruno.

What started out as a beautiful wedding photoshoot on Laguna's Treasure Island Beach quickly turned into a soggy nightmare, after the couple was swept off a rock by a giant wave.

Her car slammed into an underground support beam in the concrete tunnel, but she was able to avoid underground obstacles.

Along the way she thought about her boyfriend, who she had just texted with a photo before going under.

"This is the last time he's going to see me, gonna talk to me, and thinking about my mom," Bruno said.

Bruno kept fighting. At 4'7", Bruno showed the will of a giant.

Bruno swam into the Passaic River,coming out behind a house on the Rutherford side of the waterway. She was able to avoid any obstacles, and was just carried by the moving water. She admits she almost gave up.

The twisted, damaged, and mangled mess that was her Toyota Prius was later lifted from a huge storm drain.

The severe damage to the car was caused when it slammed into an underground support beam in the concrete tunnel.

The 24-year-old has an ear injury and some scratches. She saw where her car ended up trapped by a concrete support beam in the drain that she missed, and is reflecting on what happened.

"This thing keeps getting in my mind - unbelievable I'm alive," she said.

"At DoorDash, we take the safety of our community extremely seriously, and our thoughts and sincerest condolences are with the Dasher who endured this frightening event. We have reached out to offer our support during her recovery and will be providing her with financial assistance as well as occupational accident insurance to cover expenses incurred."
Report a correction or typo
Related topics:
new jerseyfloodingcaught on videou.s. & worldsurvivor storycaught on cameraflash flooding
Copyright © 2021 WABC-TV. All Rights Reserved.
TOP STORIES
Kaiser Permanente mandating COVID-19 vaccine for employees, physicians
South LA blast contributed to 2 deaths, families say
Santa Ana school hopes new lighting system can help fight COVID
Homeless told to leave Irwindale encampments
California unemployment crisis: Calamity at the EDD
Former employee sues Porto's alleging pregnancy discrimination
Firefighters battling brush fire in Corona
Show More
California seeing uptick in first-dose vaccinations
Disneyland to reveal new 'Magic Key' program in place of annual passes
Father of 5 who was waiting out COVID vaccine dies from the virus
Some areas of South Tahoe closed due to animals with plague
Pedestrian killed in Santa Monica hit-and-run crash
More TOP STORIES News