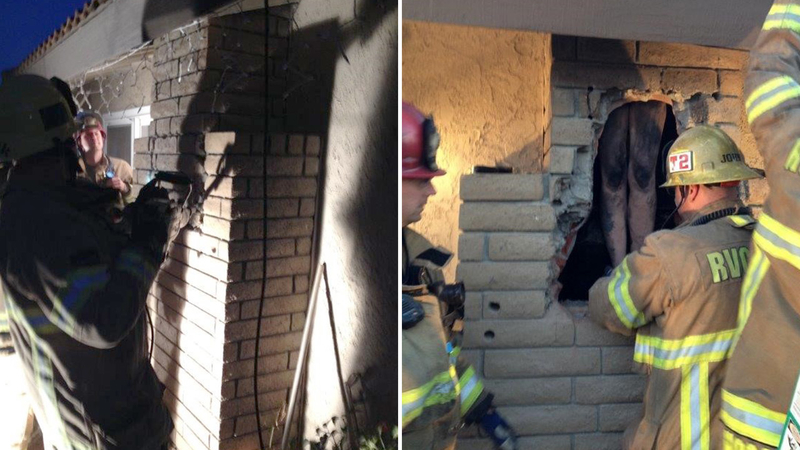 Tony Hernandez, the homeowner, identified the woman as the mother of his children, and says he did not want her in the house.

The 35-year-old woman was reported stuck at about 5 a.m. in the 15800 block of Rancho Viejo Drive. Hernandez got up for work around 4:30 a.m. when he heard his wife calling his name. He checked the front and backyards, but couldn't find her.

"She called me back again, and I said, 'Where are you at?' And she said, 'I'm trapped in the chimney.' So I tried to get her out from the top but it was too hard," he said.

Hernandez said he nearly fell off the roof trying to rescue her, and that's when he called 911. His wife said she told him she had knocked and rang the doorbell during the night. Hernandez said he did not hear anything.

The woman was taken to the hospital for minor injuries and is expected to be OK. Hernandez said he believes she tried to get in through the chimney because it was so cold outside.

According to Hernandez, his wife stops by the home time and again to see their children. The children were not home at the time of the incident.

The damage to Hernandez's chimney is expensive, and he says it will have to be rebuilt.

CORRECTION: An earlier version of this story stated the person rescued was a girl. The age of the person who was trapped was not immediately released by CalFire.