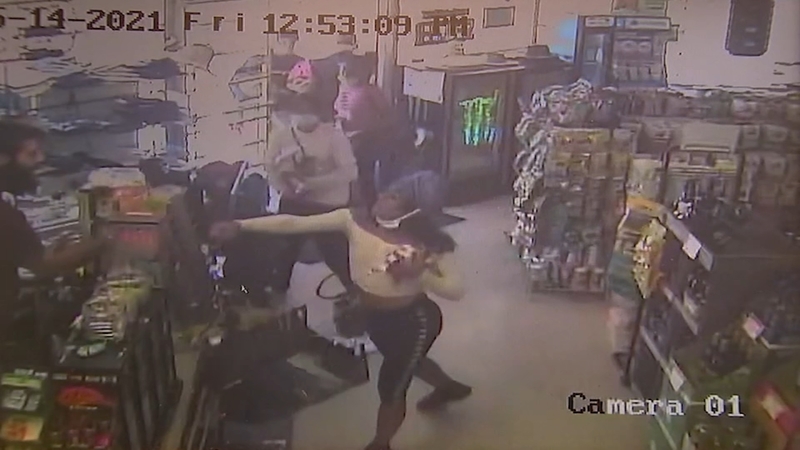 WOODLAND HILLS, LOS ANGELES (KABC) -- A fed-up Woodland Hills liquor store owner says a group of teenagers have been repeatedly showing up to his business and helping themselves to merchandise without paying.

The situation took a violent turn when the teens showed up on Friday and the store clerk tried to stop them. The latest incident was caught on surveillance video.

The clerk's brother told Eyewitness News the group was told to leave, but they started to throw things and broke shelves.

While standing behind the checkout counter, the clerk can be seen on video trying to stop a girl from grabbing an armful of merchandise.

That's when another girl steps in and apparently tries to throw a punch at the clerk, knocking over a plastic shelf and merchandise.

Footage from another angle shows the group walking back into the store, seemingly having a verbal argument with the clerk as he backs away from them.

The teens then proceed to grab stuff off the shelves and one of them grabs what appears to be a liquor bottle and hurls it at the clerk. After knocking over more merchandise, leaving the store trashed, the group leaves the store.

"When they started throwing stuff they broke bottles. They hit him, she tried and punch him in the face," the clerk's brother said. "Liquor was all over the ground."

The group left and returned a third time, making threatening gestures and yelling.

The owner says he has filed a report with the LAPD Topanga Division, but he also hopes people will recognize them and turn them in.