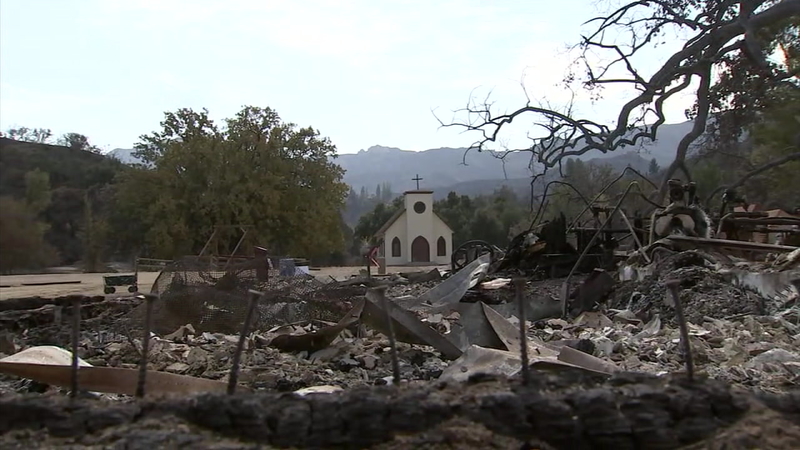 AGOURA HILLS, Calif. (KABC) -- Among the destruction caused by the 98,000-acre Woosley Fire was a sliver of Hollywood history.

Scores of movies and TV shows were filmed at the Paramount Ranch, starting in 1927 when Paramount Pictures first purchased the property - and continuing up until just last week.

"This western town area was built in the 1950s when the genre of western television shows was super popular," said park education specialist Robert Cromwell.

Historians, park rangers and local politicians toured the iconic ranch on Friday, for the first time since the fire.

"We lost all of our historical archives up there and that really hurts. That's where we had the original documents from when the studio bought the ranch," said movie historian and park volunteer Mike Malone.

One piece of land covered in ash was formerly a saloon used in the hit HBO series "Westworld."

Should rain move into the region, the surrounding land is now at risk of mudslides.

Authorities are already working to minimize any damage by preparing culverts and roadways.

Today, we launch The Paramount Project, the campaign to rebuild Paramount Ranch. It was destroyed by the #WoolseyFire a week ago. With your help, it will rise from the ashes as a fabulous location once again for movie magic and community events. https://t.co/FOt5UC4KhX #movies pic.twitter.com/zAojpCBF4z

Wildlife is also taking a hit.

Eleven out of 12 mountain lions and three out of four bobcats they track in the Santa Monica Mountains are accounted for, but they are concerned about the missing two.

For now the focus here remains on rebuilding.

"It is our intention in the short term to construct some sets on the other side of the creek here so we can continue to operate and welcome people to Paramount Ranch," said superintendent David Szymanski of Santa Monica Mountains National Recreation Area.